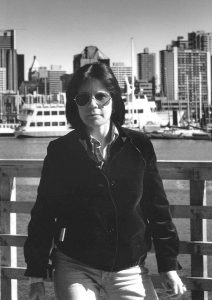 Mary Anne McEwen (1946-2011) was a feminist, LGBTQ2S+ activist, and media producer. She was active in Vancouver’s independent media community as co-founder and producer of the community cable TV series Gayblevision [1], an originating member of the Out On Screen Society (Vancouver Queer Film Festival) and co-founder of Women In Film and Video Vancouver. McEwen was also founder and President of Forward Focus Productions Ltd. and worked as a freelance writer, editor, analyst and story editor until 2011.

McEwen and the Gay Games
McEwen attended San Francisco’s Gay Games I in 1982. She was in the city to film a documentary on the LGBTQ2S+ -inclusive Metropolitan Community Church. Inspired by the experience, she returned home a strong proponent of the Gay Games’ message and an advocate for bringing them to Vancouver. 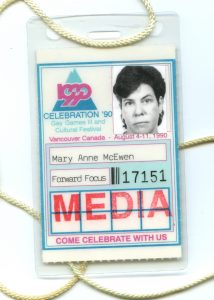 In 1989, McEwen and her partner in Forward Focus Productions Ltd. (FFP), Cherene Shea, began pursuing funding for a film on the history of the Gay Games which would include Celebration ’90. Their interest was less about the events and more about the people and issues behind the movement. They wanted their film to not only resonate emotionally for the viewer but to challenge them intellectually as well.

Meanwhile, Gay Games III organizers were pursuing broadcast options.  After a year of exploration, a proposal was presented by local cable company, Rogers, for seven one-hour television episodes with a projected cost to the Games of $95,000. The Games’ board had stipulated from the start that the broadcast project be self-funded. By mid-July 1990 it was clear fundraising had fallen far short and they were forced to abandon the project. Instead, the board accepted an alternative proposal by Forward Focus Productions to shoot archival documentation of Gay Games III for  $28,200. [2]

By the time the agreement was reached the Opening Ceremonies were only three weeks away. FFP began shooting a week later. They ran three video crews for the 10-day event and a 4-camera operation for the Opening and Closing Ceremonies.

Following the Games, correspondence shows FFP continued to pursue their film through at least 1993. Ultimately, however, the project went unrealized. The 143 hours of unedited footage of Celebration ’90’s sporting competitions, cultural events, backstage activities, and interviews, remained in boxes for 20 years.

The materials in this exhibition represent only a small fraction of the video shot. [4] Yet, as McEwen and Shea hoped, their decision to feature  the people and issues behind Gay Games III help us understand how ambitious the project was and how dedicated its volunteers and staff were as they worked to realize their shared dream of a Vancouver Gay Games.

The Origin of the Gay Games Movement