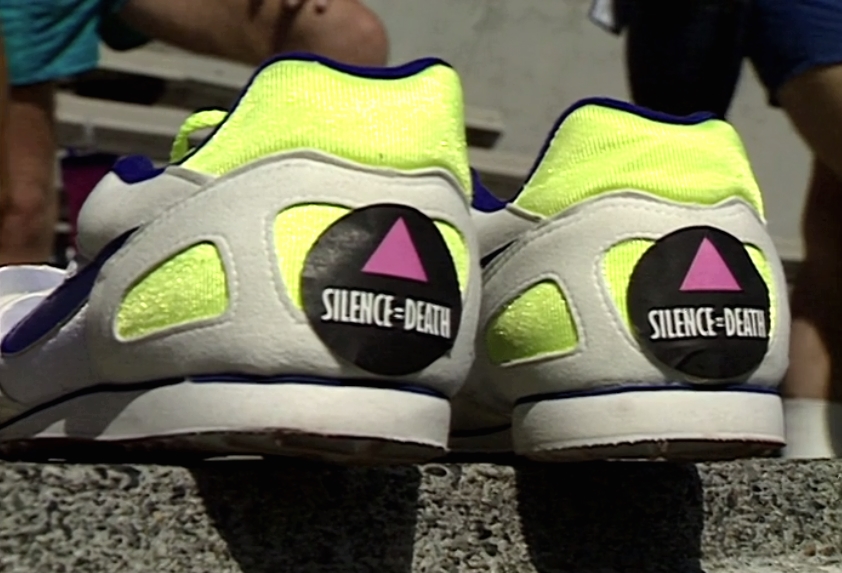 The Vancouver LGBTQ2S+ community were early leaders in HIV/AIDS education. One example is community-based organization AIDS Vancouver (est. 1983). They focused on prevention and support services aimed at gay and bisexual men. They approached the MVAAA board about providing important HIV/AIDS information to its thousands of participants. The board agreed.

AIDS Vancouver partnered with the newly-formed Women and AIDS Society and together they assembled thousands of AIDS kits for registrants. This welcome kit supplied details on local services and organizations (like the Persons With AIDS Society), prevention brochures, a syringe, and even lube and condoms in support of their safe sex message.

View this video with a transcript: Rick Marchand on the AIDS Kit

“The problem with a lot of the fight against AIDS is that we’ve confused the issue of AIDS with AIDS, the disease…and homosexuality. The facts are we should be combating AIDS…and homosexuality is another agenda, and that was the agenda, in my opinion, for last night.” [1]

Dr. Blatherwick and AIDS activists did not always agree. However, he was media savvy, refused to be cowed by adverse public opinion, and insisted on a fact-based approach to HIV/AIDS in very conservative times.

Earle’s Canadian mother, Marion Nicholson, drove his safety car. At each stop she passionately advocated for an end to bigotry towards people with AIDS and for all parents to loudly and proudly support their LGBTQ2S+ children.

FFP recorded Earle’s reflections on AIDS’ impact on his arrival at the Terry Fox Memorial at B.C. Place Stadium.

View this video with a transcript: “Brent Nicholson Earle: The Rainbow Run for the End of AIDS”