Over the next four  years the MVAAA did the hard work of fundraising, establishing committees, securing venues and hosted housing, developing administrative systems and promotion. As planning progressed the issue of meaningful inclusion of subcultural communities, like drag and leather, became more pressing. 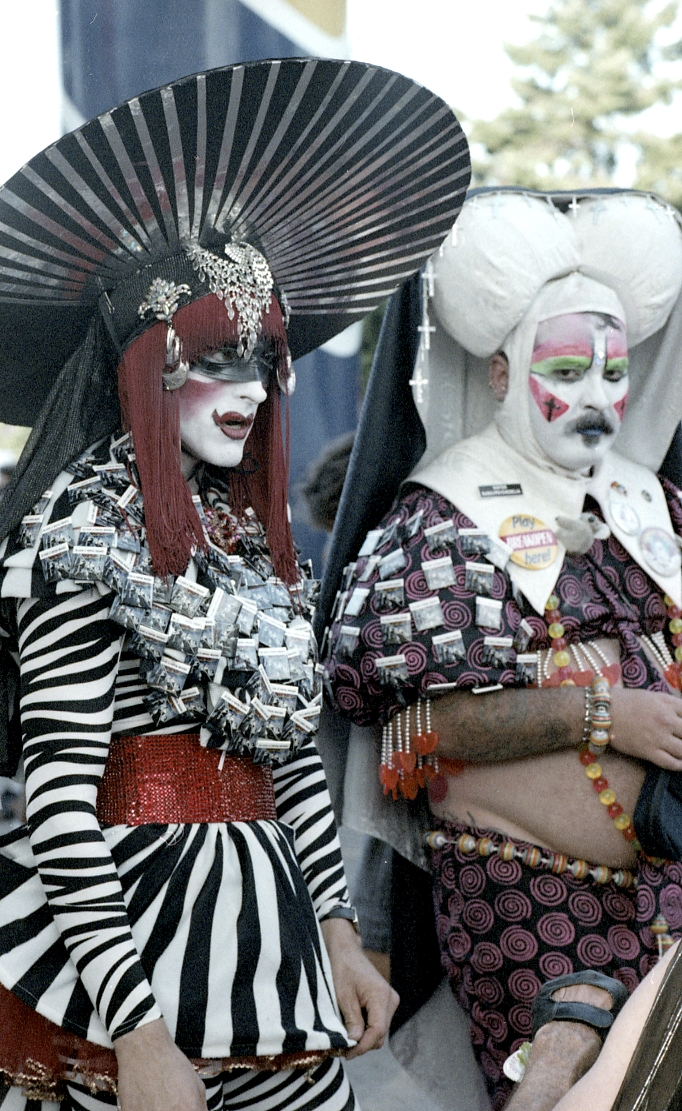 The Sisters of Perpetual Indulgence, San Francisco order, at Celebration ’90.

Vancouver’s LGBTQ2S+ community generally welcomed the Gay Games’ promise of positive visibility, unity and pride. However, its strategy of greater civil rights through assimilation [1] was being questioned by contemporary queer and feminist theories, and AIDS activist strategies.

A letter from a staff member to the Board suggests discussions had occurred around the role these communities would be permitted to play in the Games. The staff member expressed deep concern” around “the prospect of excluding members of the ‘drag’ community from an official presence at Celebration ’90.” [2]

This was a pragmatic and ethical issue for the Games. In addition to the drag community’s historic activism on LGBTQS2+ rights, they were a critical partner in community fundraising, including for sports teams. The leather community also supported Celebration ’90. “Mack” McKinnon (owner, Mack’s Leathershop) strongly believed the Games would be a great unifying force for Vancouver’s LGBTQ2S+ community.  He’d raised funds through the Mr. Drummer contest, marking the first cooperative venture between Vancouver’s leather and LGBTQ2S+ sports communities.  At the time of his death in 1988, he was also Celebration ‘90’s largest individual donor.

By the start of the Games, the MVAAA Executive Director was vocally supporting the visible inclusion of drag and leather. Drag artist, Bill Monroe, had also taken on several high-profile roles for Celebration ’90.

View this video with a transcript: “Bill Monroe and Mark Mees: The Drag and Leather Communities”

The most conservative aspects of the Games model would be debated before, during, and after Gay Games III by LGBTQ2S+ activists and the community. Local writer, Dan Gawthrop, neatly summed up the feelings of more than a few when he asked, “Does promoting a ‘positive’ self-image really mean we should all look like young, white, Socred males?” [3] [4]

B.C. writer, Jane Rule, explicitly addressed what she believed was the responsibility the mainstream LGBTQ2S+ community had to its “radical fighters on the street.”

View this video with a transcription: “Jane Rule: Our Most Courageous People”