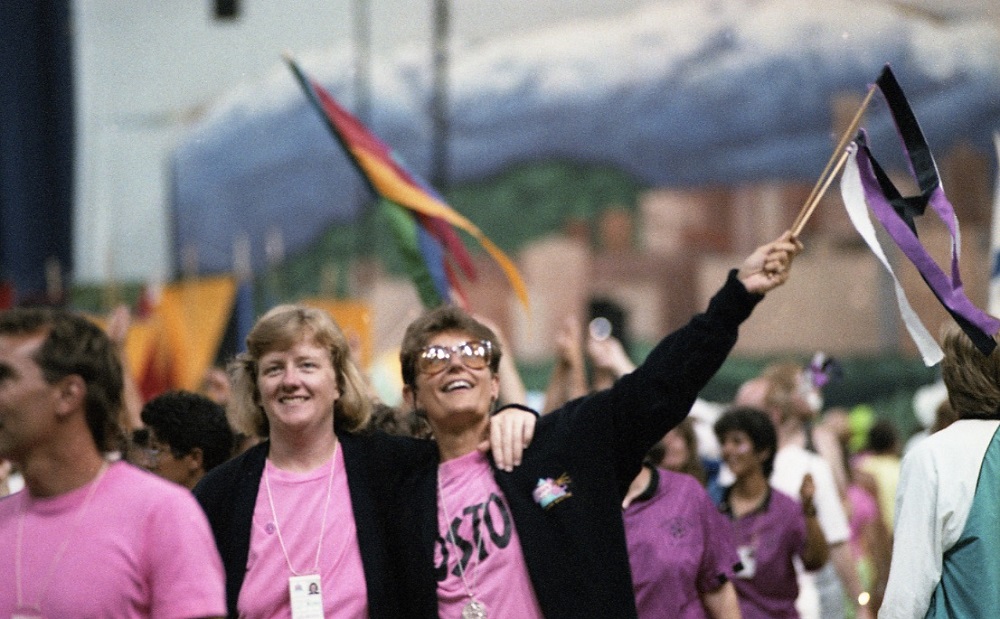 A group of female athletes parade into B.C. Place for the Celebration ‘90’s Opening Ceremonies

We are out, we are proud, and we shall never, ever, again be invisible.

A historic number of LGBTQ2S+ athletes paraded into B.C. Place for possibly the largest gathering of LGBTQ2S+ athletes ever held. Over 7300 athletes from 27 countries had registered. Along with the United States, athletes from Poland, Switzerland, Norway, Sweden, Japan, Zimbabwe, Guam, Ireland, Italy, England, Holland, Israel, Venezuela, and Papua New Guinea and, notably, East Germany, made up the international teams.

View video with a transcript: “Opening Ceremonies: Athletes of the World”

Next came the 1460 strong contingent of Canadian athletes – from Vancouver Island to St. John, New Brunswick and the Yukon Territory. They were followed by the host city team. Vancouver,  with the largest Canadian city representation.

The audience stood cheering the athletes parade for over an hour as they assembled on center field.

Political representatives Vancouver Mayor Gordon Campbell, B.C. MLA Dave Mercier, and Vancouver Park Board’s Christopher Richardson welcomed the participants to the Games. But it was Winnipeg-born M. C., Robin Tyler, long-time friend of Vancouver’s LGBTQ2S+ community, who brought the crowd to their feet. She spoke movingly of the future that the Gay Games advocated for.

A Race to the Start Opening Ceremonies: Celebrate!