Biggs and Dopson thought it might also be possible to field a multi-sport Vancouver team. They reached out to existing gay bowling and billiards teams, the women’s soccer team, and individuals in track and swimming. Their idea was met with enthusiasm. Fifty-five LGBTQ2S+ athletes committed to the Vancouver team. Other Canadian cities did the same. 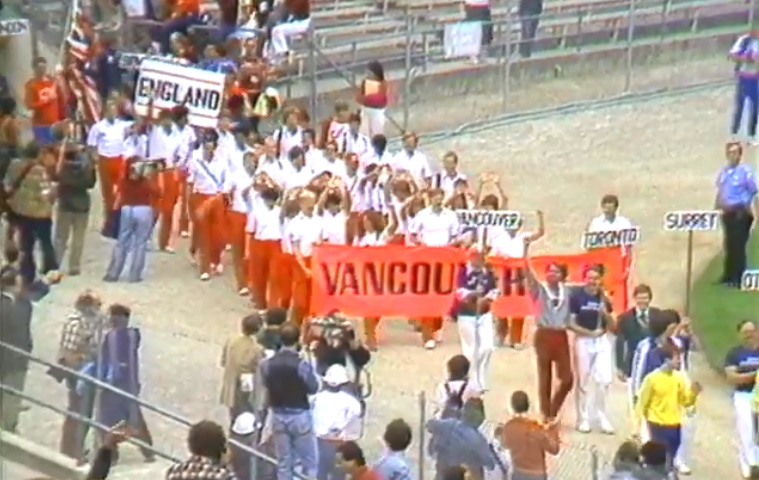 Over the next months teams solidified. Fundraising for their costs began. The women’s soccer team made “Support Women’s Sports” bumper stickers, t-shirts, and held informal parties to pay for their uniforms. Through the support of businesses and the LGBTQ2S+ community $3000 was raised for Canadian-themed red and white uniforms for the Vancouver team. [1]

The Vancouver team arrived in San Francisco that August ready to compete. It included the women’s soccer team and all-male billiards, bowling, softball, and volleyball teams, and a mixed track team. It was by far the largest city team from Canada.

Within hours of checking into his hotel, Dopson impulsively set out to Games headquarters in hopes of meeting Tom Waddell.

View this video with a transcript: “Richard Dopson: First Meeting with Tom Waddell”

A healthy contingent of Canadians were among the 1,350 athletes from 12 countries that paraded into Kezar Stadium for the Opening Ceremonies. Mary Anne McEwen videotaped the moment from the stands “for posterity”[2] unaware that Dopson had already planted the seed for a Vancouver bid.

View this video with a transcription: “Canada at the Opening Ceremonies of Gay Games I”

Also in the stands was Betty Baxter, a member of Canada’s national volleyball team and a 1976 Summer Games Olympian. Until earlier in 1982 Baxter had been Head Coach of the Canadian Women’s Volleyball Team for four years. Just a few months ahead of Gay Games I, she had been fired after rumours circulated in media that she was a lesbian. She spoke to FFP about how meaningful those first Games were for her.

View video with a transcript: “Betty Baxter: Gay Games I”

The Vancouver team met up on their return to Vancouver to share stories, photos, and medals. Women’s soccer had won silver, the billiards team bronze, and all three track competitors won medals, including double gold for runner Paula Pick in 5000m and 10000m. [3]

As the evening progressed the discussion among the remaining athletes turned to what it would take to put in a Games bid. Within weeks Burt Curry, Ross Doswell, Rick Amalot and Richard Dopson committed to putting on an annual Vancouver Summer Gay Games.

By year’s end The  Metropolitan Vancouver Athletic and Arts Association (MVAAA) had been constituted. It was the first official act taken towards a future Vancouver Gay Games. [4]