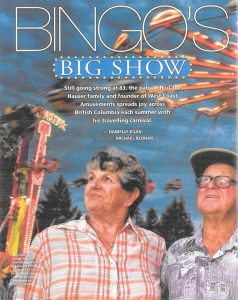 Accolades are hard to come by in the carnival industry. It is a tough business being out on the road. Most of the dealings with other showmen happened by letter or phone and a few meetings every year. Your reputation goes a long way in the industry and Bingo had a good one recognized for his success, innovation and hard work. 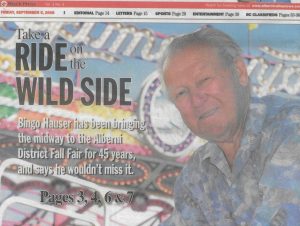 “Take a Ride on the Wild Side”

Bingo was inducted into the Showmen’s League of America Hall of Fame for his work in the carnival industry. He is in good company with carnival legends like Buffalo Bill Cody and Patty Conklin, both two time presidents of the organization.

In 2012, Bingo Hauser was inducted into The Outdoor Amusement Business Association Hall of Fame which celebrates outstanding achievement and contributions to the growth and development of the carnival industry and those who served their national trade organization. Criteria for the induction include: working in the industry for more than twenty years, and having contributed to the industry at large and made significant contributions to the outdoor amusement industry.

View this video with a transcript: “Bingo’s Induction into the OABA Hall of Fame, 2012” (Closed captions available in EN and FR)

Perhaps the greatest accolade for Bingo was to be invited back 54 years in a row to provide entertainment at the Port Alberni Fall Fair. He knew he had to be doing something right.

For It Remembering Bingo Hauser