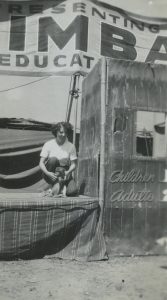 Jackie Hauser in Front of Animal Show Entrance, Circa 1950s

Although Bingo’s name framed the show, Bingo and Jackie worked the show together including the bally, feeding animals, cleaning cages and setting up the tent. The tent was large enough that crowds of people could walk through and see the exotic animals. 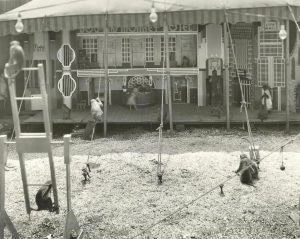 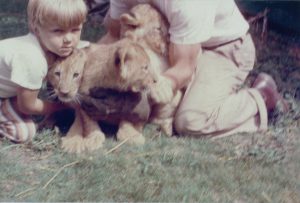 Bingo and his Daughter, Laura (Hauser) Hibbs with Lion Cubs, Circa 1955

Bingo’s animal show and route was always changing. In 1950 Captain Bingo Hauser and his lion was travelling with Gayland Shows in Western Canada. In 1953 his wild animal act was on the road with Leader Shows out of Edmonton, Alberta and in 1954 Bingo Hauser’s Jungle Compound was listed as one of 11 on Conklin Shows Canadian National Exhibition midway. 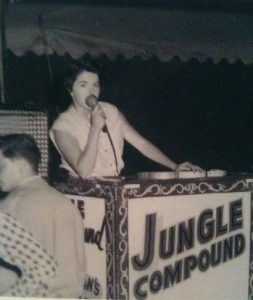 Jackie Hauser at the Jungle Compound, 1947

Jackie was often the outside talker. She would lead the bally, speaking into a microphone, explaining and promoting the show to gather a crowd, also known as a ‘tip.’ Bingo would come out with a monkey on his shoulder as part of the bally. He would give glimpses of a few of the exotic animals inside to entice people to buy tickets.

Inside the tent, fairgoers might see lions Simba and Jackie, Blackie the black bear, different monkeys, a kinkajou also known as a honey bear, flying squirrels, exotic snakes including pythons and anacondas and a large alligator. Here they would be educated about the animals, entertained. For an extra fee, you might be able to feed or pet some of the friendlier animals.

With It Winter Quarters