Traditionally, carnivals have played two kinds of dates. The first is under the auspices of a group or association. Most people know about the midway at the local fall fair. The relationship between agricultural fairs and carnivals dates back to the turn of the 20th century but it is not the only type of event carnivals play.

The Port Alberni District Fall Fair on Vancouver Island was the first date played by West Coast Amusements in 1962. This was Bingo’s last fair in 2015. Operating for 72 years, the fair and WCA have worked together for 55 years now. 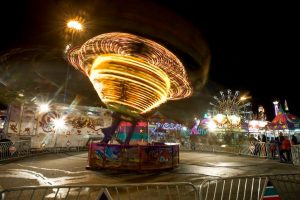 West Coast Amusements also play at rodeos, a western tradition. In 2017, they played the Ponoka Stampede, one of the Top Ten rodeos in the world operating since 1936.

Carnivals like West Coast Amusements do not last for 50+ years by doing the same old thing. They have to be innovative and creative. 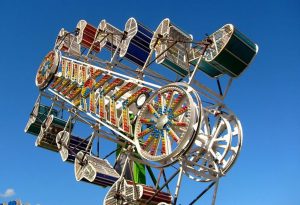 WCA Zipper Ride at Sustainival, Circa 2017

In 2017, WCA participated in Sustainival events in Edmonton, Fort McMurray and Lethbridge. Sustainival is the world’s first green carnival with a focus on energy literacy, ecology, and clean technologies. 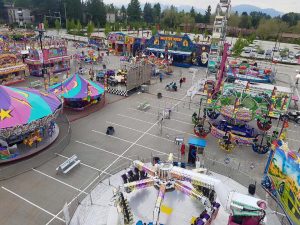 The second kind of date is called a ‘still date’ which means the carnival is setting up on its own, without another attraction. It could set up on near a shopping centre or on the edge of a prominent parking lot. Use of local marketing goes a long way towards attracting a crowd. Successful still dates can make or break a carnival’s season.

On the Road For It