By the time Irvin would have seen a circus, the golden age (1870-1920) would have already passed. The merging of the Barnum and Bailey Circus with the Ringling Brothers Circus created the Ringling Brothers and Barnum & Bailey Combined Shows. Their circus “The Greatest Show on Earth” in 1919 is considered the pinnacle of the Golden Age. The introduction of radio broadcasting in 1920 resulted in a new age: the twilight of the American Circus.

View this video with a transcript: “Circus Day In Our Town. By Encyclopaedia Britannica Films, 1949” (Closed captions available in EN and FR) 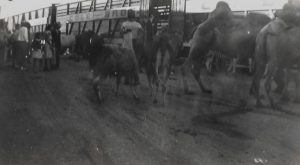 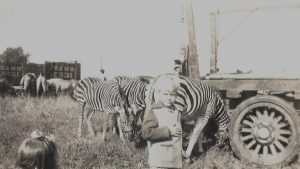 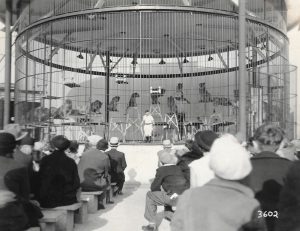 The circus of the 1930s shares many similarities with the carnival of the same time period. The industry travelled by rail, and the parade to the
fairgrounds was always a must-see event. Small circuses were only a few train cars in size while the Greatest Show on Earth consisted of 90 train cars in 1930. The animal menageries, exotically painted wagons, and colourful costumes made the free event one not to miss. The main challenge was to get the locals to open their wallets when money was tight. 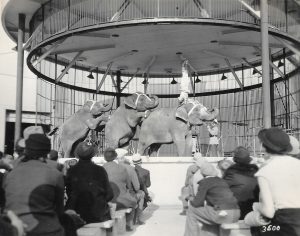 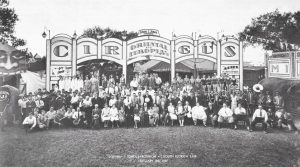 The Depression era circus had many acts you can still see today, such as trapeze acts, the human cannonball, equestrians and clowns. Many other acts, like the Wild West Show, trained bears and elephant acts, have since disappeared. Animal acts were an integral part of the circus. Contemporary circuses, such as Cirque du Soleil, did not begin until the 1970s.

Outside of the circus tent there could be a sideshow featuring human marvels and oddities. There would also be an animal menagerie where people could visit the exotic animals when they were not performing. Many of these attractions were also very similar to ones found at the carnival.

The Depression Era Carnival Growing up in Brandon