Having moved from Poland at such an early age, Irvin did not remember anything of his Polish roots other than his parents. Neither of his parents spoke much English. Shortly after arriving in Canada, his sister Ruth was born.

His father did not play a significant role in family life. Irvin enjoyed living in Brandon. He had lots of friends and there was lots for a kid to do. One of Irvin’s favourite things to do was speed skating. He enjoyed it so much he kept a pair of his early speed skates. 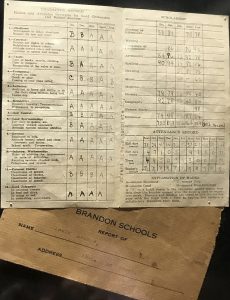 Irvin began working at a very early age to help support his mother and two sisters.

Along with chores around the house we worked odd jobs including a paper route and peeling onions for a woman named Lusk.  He became infatuated with the carnival as it was close to where he lived.

View this video with a transcript: “Crowded Carnival Midway, 1941” (Closed captions available in EN and FR) 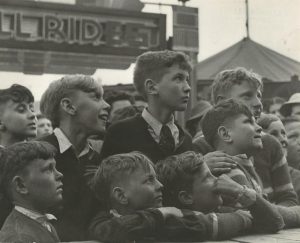 Young Boys in Awe of the Carnival, Circa 1940s

He picked up work on the Conklin Midway when it came to town with his friends Sonny Hazelwood and Whitey Judson.

Audio clip with transcript: “What Attracted Irvin Hauser to the Carnival”

Opportunity for employment was limited in Brandon. Men would join the military, the RCMP or leave to work in the mines. In 1942, after the Provincial Exhibition, Irvin hopped on the Conklin Shows train and never looked back. 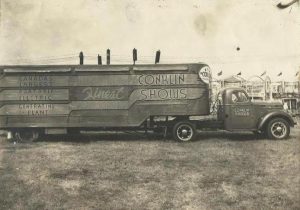 The Circus in the 1930s Learning the Ropes