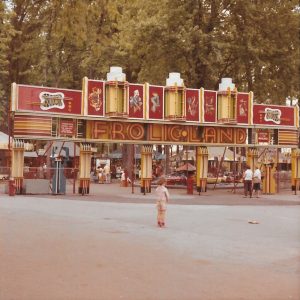 In the past, the carnival was the place to experience exotic and mysterious things. Daredevils, magicians, snake charmers, lion tamers, human marvels, fortune tellers and burlesque dancers made the carnival a can’t miss attraction. The introduction of radio (1920s) and television (1952) in Canada opened up the world to people in their living rooms. 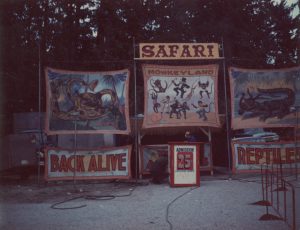 Social norms were changing as well. The display of freaks or anatomical wonders was becoming less acceptable. The geek show is an example of how showmen tried to change with the times. Geeks were portrayed as simpletons or wild men who performed horrific and squeamish acts. During the 1950s geek shows were designed as drug abuse shows which portrayed how drugs turned everyday people into monsters.

Economically, housing, feeding, transporting and paying a cast and crew was becoming much more expensive than during the first fifty years of carnival history. It was harder to draw a crowd and more expensive to run a show.

Audio clip with transcript: “Difficulties with Money During the Off Season”

Patty Conklin summed it up best. “Give the people what they want, not what you think they want”.

Bingo and Jackie were working on a new plan.

The Rise of Spectacular Rides Birth of West Coast Amusements