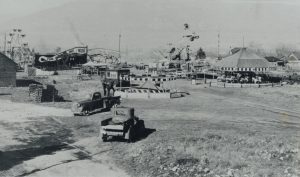 “With it” is a slang term used by carnival workers to let other carnies know they work in the industry.

The Christmas family were “with it”. They ran food concessions on Crescent Shows and Sullivan Amusements lots in western Canada, working some of the same lots as Bingo. Cotton candy, popcorn and dipped ice cream on a stick were on the menu. In the winter they set up a Christmas display at the Eaton store in downtown Vancouver with Santa Claus and food concessions. Bingo was there as well with his lion. 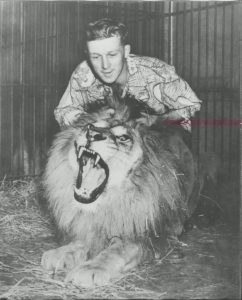 Young Bingo with his Lion Simba, 1946

Bingo became friends with Fred and Claire Christmas. He met their daughter Jacqueline for the first time when he went to the Christmas house in Langley, British Columbia, to help them chop firewood to heat their house.

Audio clip with transcript: “When Bingo Met Jackie for the First Time”

Jackie began working the midway with her parents in 1948. In August she met Bingo again while working the Penticton Peach festival. They were married May 1st, 1949, the traditional opening day of the season, and were back at work the next day. It’s not known if they performed the ritual of the carny marriage in 1949 which involved a ride together around the Ferris wheel to let the other carnival workers know they were together.

Audio clip with transcript: “Bingo and Jackie Get Married”