Everyone who works for the carnival gets a nickname. Somewhere along the way one of Irvin’s coworkers called him “Bingo” and the name stuck.

When Bingo left on the train with Conklin Shows he was hired to do odd jobs for $15 a week. He then began working with concessionaires and switched over to work the shows. Here he became a talker and learned the art of the bally. Within a few months Bingo had a management role and was making $50 a week.

One of the shows Bingo worked was the “Iron Lung”. It was a ‘single-O,’ a small show with one attraction, in this case a medical show where a beautiful young woman has a medical condition that requires her to live in a machine that helps her to breathe (the iron lung was an invention that was used for real medical purposes, a cylinder shaped mechanical respirator that started to be used in the 1930s and were more common in the 1940s during polio outbreaks). Bingo would tell the audience about the poor girl’s medical condition and the new medical marvel that keeps her alive. The girls who worked the Iron Lung were not supposed to go to town and let the secret out that the show was a fake. 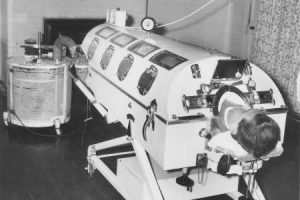 Although difficult to trace, it appears that Bingo worked for Conklin Shows, Royal American Shows and Crescent Shows from 1942 to 1947. It was a difficult period in the carnival industry with the military taking over many fairgrounds for training and the gasoline rationing and travel restrictions. Everyone had to make do with less. 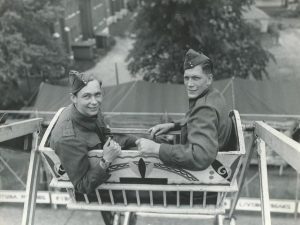 RCA Soldiers Taking a Ride on the Ferris Wheel, Circa 1940s

Growing up in Brandon Lion Tamer