Even though the war was officially over, the soldiers’ return to Canada was not without difficulties. Repatriation was slowed due, among other things, to mandatory medical examinations and the sometimes-complicated transportation logistics. 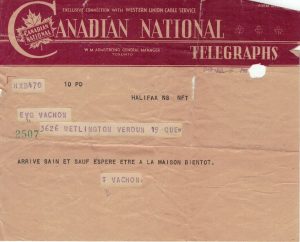 Telegram from soldier Fernand Vachon to his family 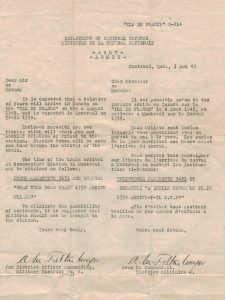 From June 1945 to June 1946, thousands of soldiers returned home each month. The City of Verdun welcomed their heroes with “Welcome home” banners hung in the streets as well as a ceremony to honour the combatants at the Auditorium on October 1, 1945. 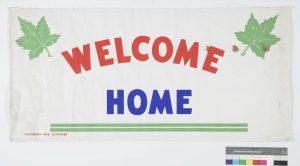 Listen to this audio clip and read a translated transcription of Noëlla Bisson recalling the soldiers’ return to Bonaventure Station. 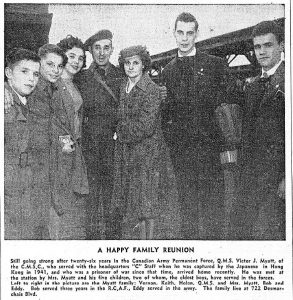 While the reunions were joyous, adapting to a new reality was often difficult. Some couples had gone five years without seeing each other, and young children did not know or only had the faintest memories of their fathers. Some wives found that their husbands came home very changed men and, in some cases, felt like they were living with a “stranger.”

For many soldiers, their return came hand in hand with the grief of discovering the loss of a family member, friend or comrade-in-arms during the conflict. The wounds were also physical. Soldiers limped, others had burns or were blinded, and some were amputees. Some 600 Verdunites were injured during the Second World War. Many veterans returned to a difficult economic situation, unable to get their old jobs back and finding themselves unemployed.

In 1944, the Canadian government created the Department of Veterans Affairs to help the soldiers with various measures, including land grants, help with job searches or returning to school, as well as financial and psychological support. Despite all of these measures, many veterans were haunted by their war experiences for the rest of their lives.

With the soldiers’ homecoming, women were strongly encouraged to return to the home and resume their role as housewives. Their participation in the war effort and in the job market had had an impact on these women and they had taken their first steps toward emancipation.

Waiting and Grieving Veterans Come Together