George Frederick “Buzz” Beurling was born in Verdun on December 6, 1921. He developed a passion for flying at a very young age, learning to fly at age 14 and flying solo at 16. The Royal Canadian Air Force declined Beurling’s attempt to enlist and, in 1940, he joined Britain’s Royal Air Force in which service he would become a fighter pilot. 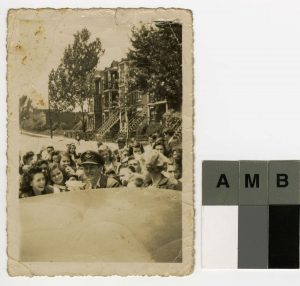 Beurling, in uniform, surrounded by a group of students

His squadron mates nicknamed him “Buzz” because of his tendency to break the rules by fly dangerously close to ground level. In June 1942, Beurling was sent to Malta, in the Mediterranean, where the next month while flying a Spitfire, he shot down 16 German and Italian aircraft in only two weeks.

In October 1942, Beurling was shot down and wounded. The next month, he came home as the greatest Canadian hero of the war up to that time. The City organized a massive celebration in his honour at the Verdun Auditorium. Everyone wanted a glimpse of Verdun’s fighter ace and the city was wild with celebration. 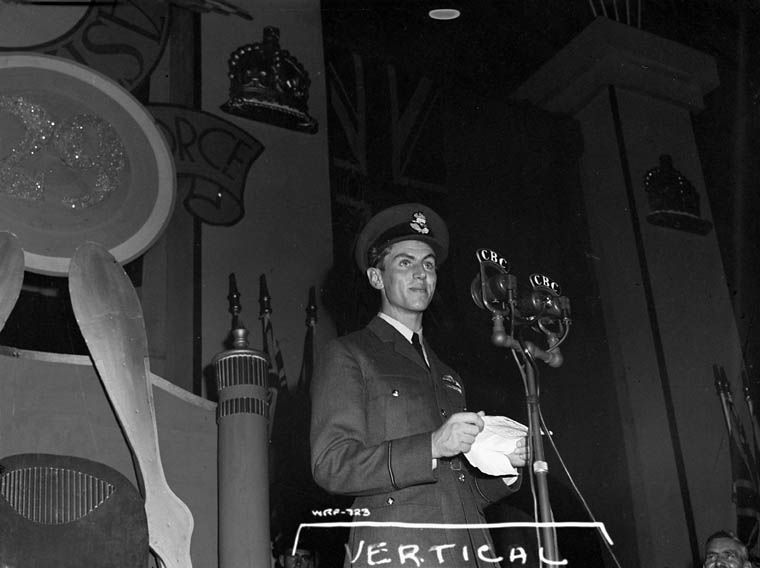 Listen to the recollections of Douglas Whyte about this most memorable of events in wartime Verdun.

In 1943, while convalescing from his wound, Beurling undertook a nation-wide fundraising campaign for the purchase of Victory Bonds. On September 1, 1943 he transferred from the Royal Air Force to the Royal Canadian Air Force and returned to Britain to resume combat operations. During the war he shot down 31 aircraft overall and was demobilized in October 1944.

George Frederick Beurling died in Italy on May 20, 1948 when the aircraft he was piloting crashed while en route to Israel, in whose air force he had enlisted as a fighter pilot.