The roots of the Rolland family in this country can be traced to the Conquest of 1760, when Sergeant Jean-Pierre Rolland shipped out from France along with other members of the Guyenne Regiment, intent on defending Canada. After the defeat of the French, he decided to stay and start a family. One of his sons, Pierre Rolland, married Euphrosine Daunay, and their son Jean-Baptiste Rolland was born in 1815. 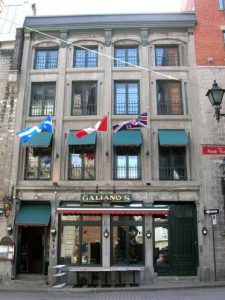 Jean-Baptiste Rolland’s store-warehouse on Rue Saint-Vincent in Montreal, where he founded his bookshop.

At age 17, with just 25 cents in his pocket, Jean-Baptiste left the family nest in Saint-Hyacinthe to seek his fortune in Montreal. After a strenuous three-day journey on foot, he stopped at a residence on Saint-Vincent Street to ask for information. That house would eventually be home to the first offices of the Rolland Paper Company.

Jean-Baptiste immediately found work as an apprentice to Ludger Duvernay, printer and publisher of the newspaper La Minerve and founder of the Société Saint-Jean-Baptiste.

In 1842 he opened his own bookshop on Saint-Vincent Street, the Librairie Catholique de Jean-Baptiste Rolland. He also went into publishing, printing many school textbooks.

While Jean-Baptiste gained familiarity with the paper trade thanks to his experience working in print shops, he knew nothing about how paper was made. But that didn’t stop him from wanting to start his own fine paper manufacturing company, having quickly grasped the industry’s potential. At the time there were only a handful of such companies in Canada, and they tended not to last because of low output. On May 1, 1882, the Rolland Paper Company was born.

Jean-Baptiste Rolland, first president of the Rolland Paper Company, from 1882 to 1888.

From the start, Jean-Baptiste’s company established a tradition of excellence that would be maintained for generations, based on dedication to a job well done, the pursuit of quality and, above all, progress and innovation. Before long, he brought his sons into the family business, becoming one of the first businessmen in Montreal to partner with his children and assign them responsibility.

If I have achieved any success in business, it is because I have always tried to get rid of old habits. I have taken on my sons as associates and, when an important transaction comes up which is a little out of the ordinary trek of my business, I like to consult with them. I very often trade my ideas for theirs.

Jean-Baptiste Rolland quoted in a speech by Lucien Rolland

Sadly, the founder succumbed to illness in 1888, at age 73. A lavish funeral was held at Notre-Dame Church in Montreal. By virtue of his hard work, courage and integrity, Jean-Baptiste Rolland is remembered as a key figure of his time and a pioneer of industrialization in Saint-Jérôme.