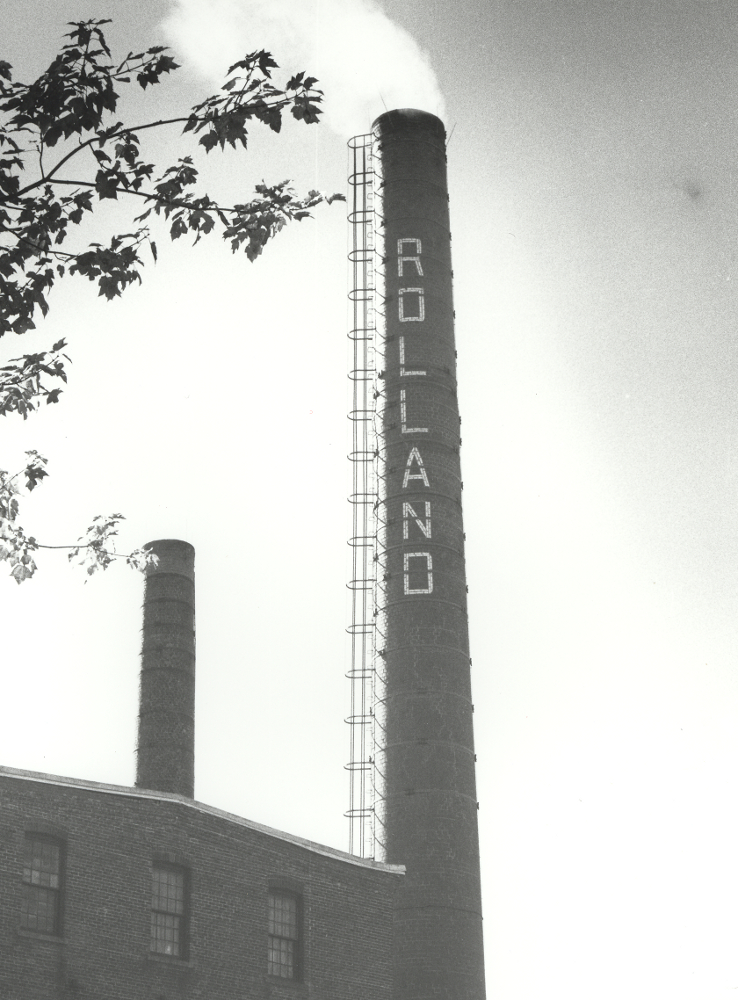 The smokestack at the Mont-Rolland mill.

From its founding, the Rolland Company was considered private, legally speaking: it was owned by the Rolland family. But by 1928, demand for fine papers was steadily increasing, and even after upgrades both plants were running at capacity. The Mont-Rolland mill was churning out 5,300 tons of paper per year, while the Saint-Jérôme facility was producing 1,600 tons of rag paper. 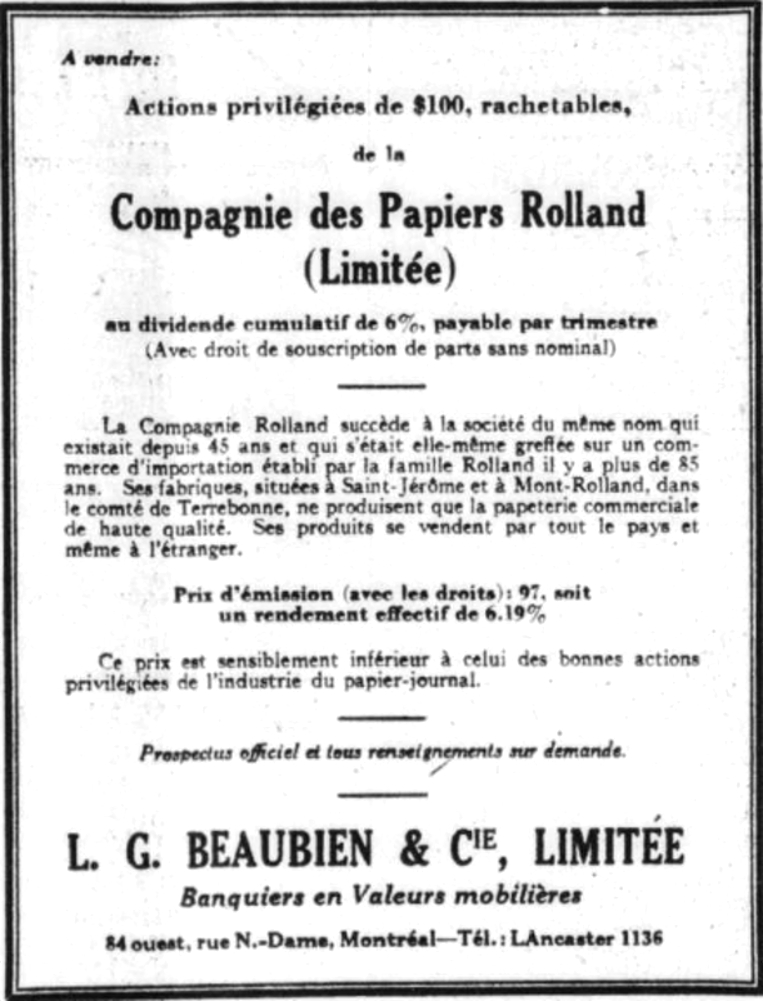 Advertisement for the sale of shares in the Rolland Company, in 1928.

Still this was insufficient to meet demand. Realizing the obvious need for expansion, Stanislas Rolland decided to take the company public, under the name Compagnie de Papier Rolland Limitée / Rolland Paper Company Limited). Nearly 60,000 voting shares were issued, a third of which were owned by members of the Rolland family.

The company, which had always been a family affair,
will now have a public stake as well.

Construction work quickly got underway in Saint-Jérôme to install two new machines, numbers 5 and 6. When the economic crisis hit after 1929, however, the company’s projects were put on hold. During this period, many employees saw their income shrink. To support them, management organized committees to discreetly inquire into the needs of the most affected families, and provided financial assistance in the form of family allowances. By 1933, 36 employees were receiving the allowances, which totalled $3,068 per year (about $58,000 in today’s currency). 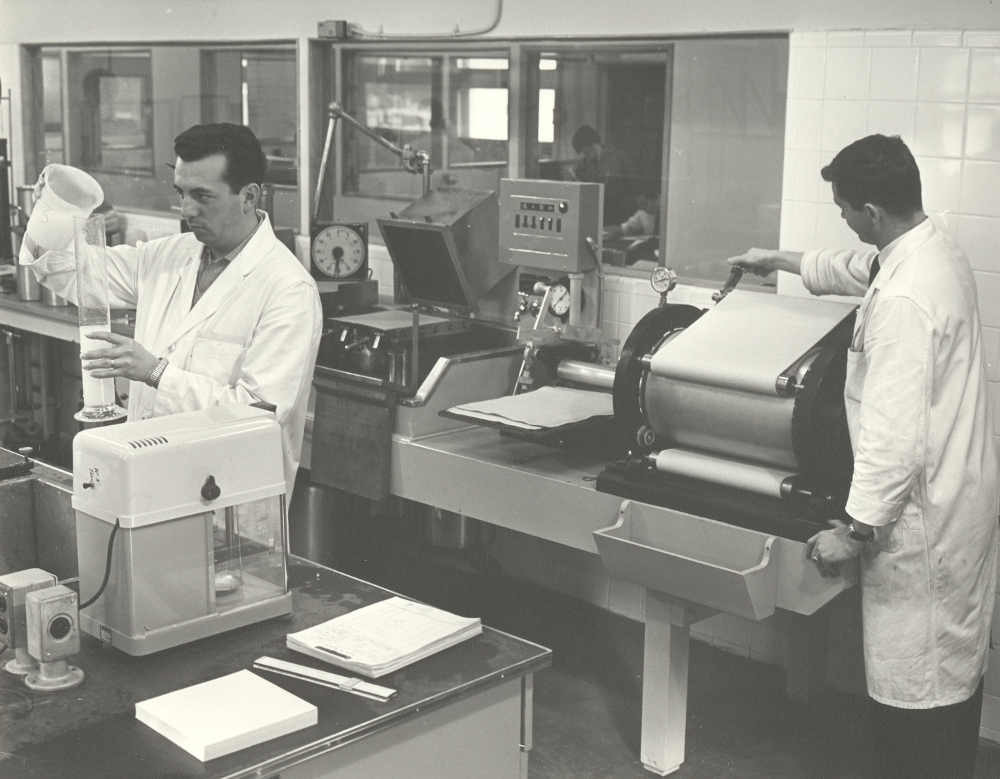 Despite the slowdown, the company pushed ahead with plans; for example, setting up quality control laboratories. In the past, each plant manager had to check the paper himself: every hour he would scrutinize a freshly produced sample of paper with a magnifying glass and feel it by hand.

Once the impact of the Depression eased, the company was able to complete its expansion plans, installing Machine No. 6 in 1940. This enabled it to meet the high demand caused by the Second World War. 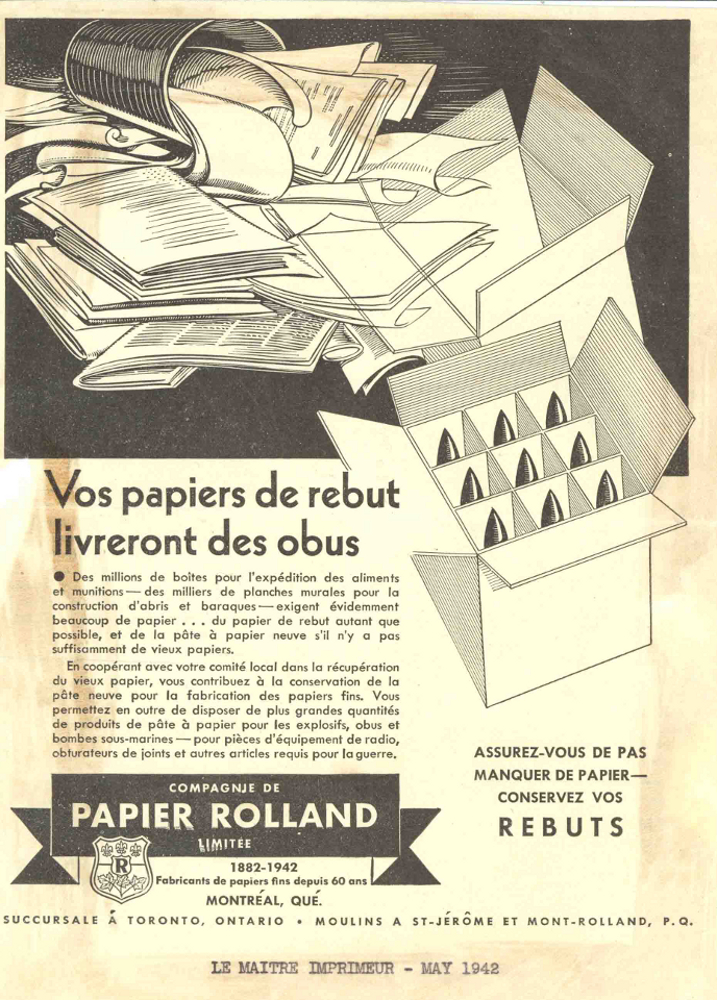 Advertisement for recycling paper in wartime, 1942.

In all but five years, the company was consistently profitable, even during the Depression. Despite equipment that was showing its age, the company held its own against increasingly powerful competitors equipped with state-of-the-art, high-performance machinery. For the members of the Rolland family, one thing was sure: they would never sacrifice the quality of their renowned paper products as a means of competing.

Working for the Rolland Company “So, so, so, solidarité!”: the birth of the labour union movement