Between 1905 and 1907 the McLaughlin brothers – inspired by the success of early Buick, Oldsmobile, and Ford cars in the United States – attempted to start automobile production in Oshawa. They had no experience in how to make, market, design, and sell motorized vehicles, and the field was so new that experienced engineers were difficult to come by.

In the spring and summer of 1907, the McLaughlin Carriage Company began marketing the McLaughlin Model A, a more powerful and expensive knock-off of the Buick car being manufactured by U.S. industrialist Billy Durant. Unfortunately, the McLaughlin’s chief auto engineer, Arthur Milbrath, developed severe lung disease, and the Model A was never sold. 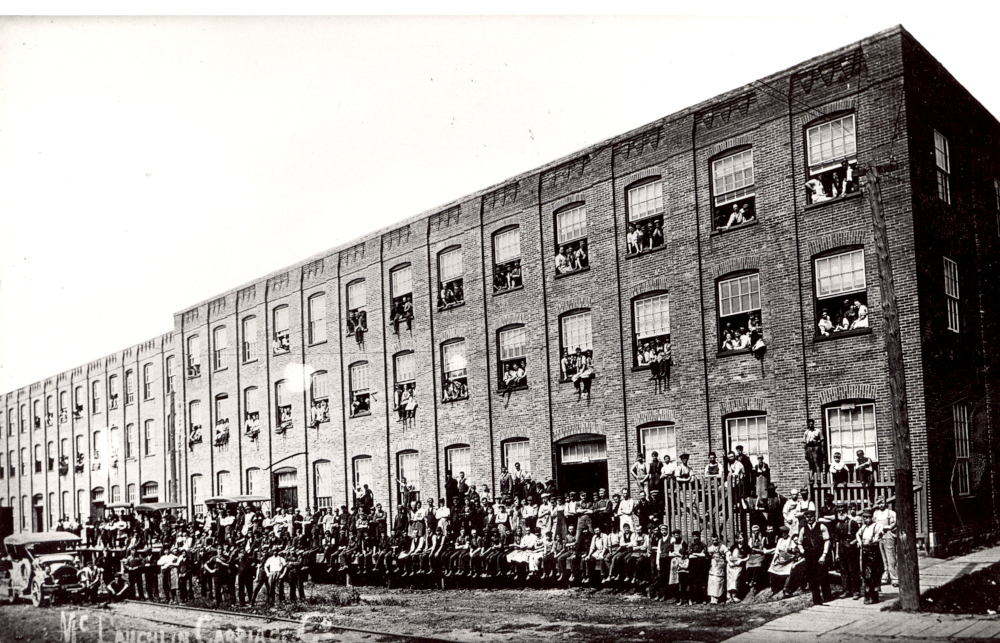 An image of the McLaughlin Carriage Works circa 1908, with several early McLaughlin-Buicks parked among the crowd.

To recover from the failure of the Model A, the McLaughlins turned to Durant, signing a deal that would permit the company to manufacture Buicks in Canada. The Carriage Company would produce a car designed by American engineers and made mostly with American parts, but with a body designed and built in Oshawa. Robert McLaughlin was still in charge, but most of his initial auto workers – the first in Oshawa – came in from the United States and worked directly for Buick.

In 1908 Durant grouped Buick and Oldsmobile into a new company that he called General Motors, adding Cadillac and Oakland (later Pontiac) the following year. This brought the McLaughlin Carriage Works under the GM umbrella. 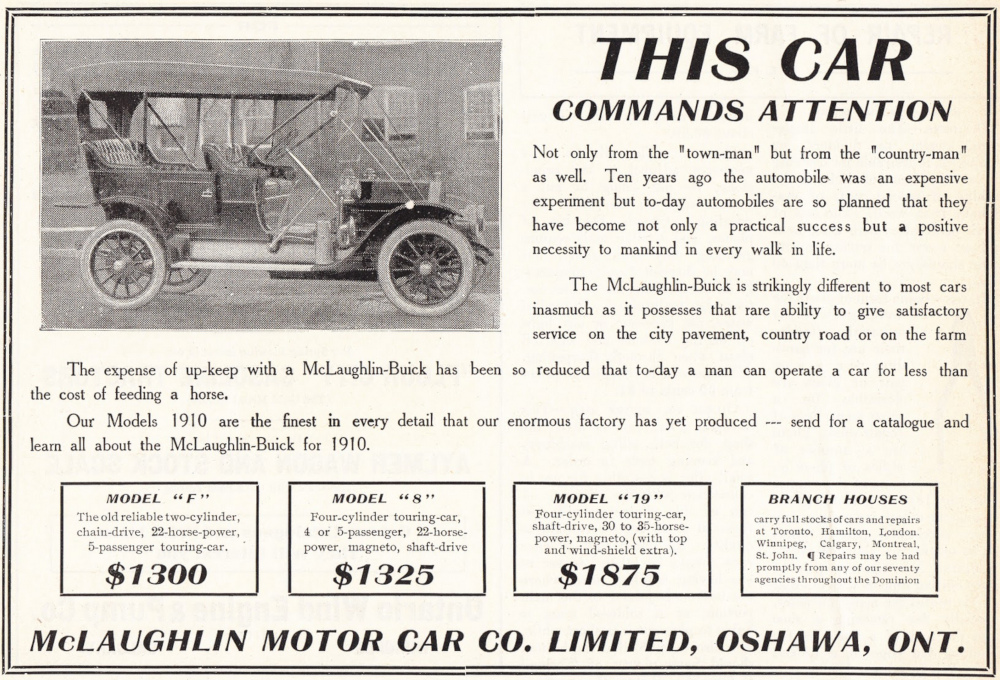 An ad for early McLaughlin-Buicks from 1910. In keeping with early automotive advertising, the ad focuses on the merits of the automobile in farm use. Canada had a primarily farming-based economy, and any tool that appealed to farmers was guaranteed to spread far and wide.

The first McLaughlin-Buick, the 1908 Model F, was a near-identical copy of the U.S. Buick Model F, with the exception of slightly more elaborate bodywork and trim. Powered by a 22-horsepower engine, the open-topped car could manage a top speed of 65 kilometers per hour (40 mph).  A total of 154 were built and sold in the first year of Oshawa automobile production.

Before 1915, McLaughlin Carriage Works was making almost 20,000 carriages a year, and fewer than 1,000 automobiles. Its cars were more expensive than its competitors, but also better built, especially when it came to interior trim, which was borrowed from McLaughlin buggies and carriages.

During the First World War, with horses desperately needed on the front lines in Europe, the Canadian horse-drawn carriage market collapsed. The appeal of cars over horse-drawn carriages was on the rise. Sam McLaughlin, noticing the trend, persuaded his father to sell the carriage works to Carriage Factories Limited of Orillia in 1915. The era of the McLaughlin Carriage was over. By this time William Durant had started a new auto company, Chevrolet, and he convinced Sam McLaughlin to start building these lower-priced cars along with Buicks. It took some time before Chevrolet was folded into GM in the United States. Initially, McLaughlin was the only facility building both Chevrolet and Buick automobiles under one roof. 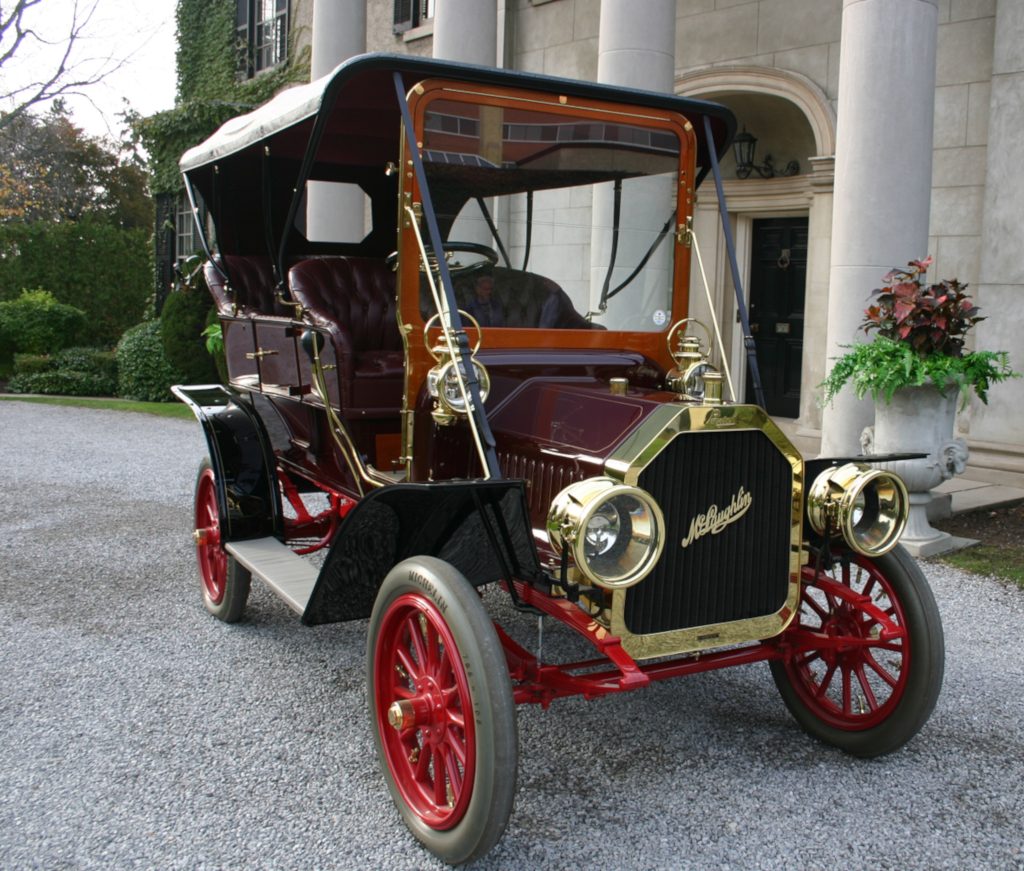 An original 1908 McLaughlin-Buick Model F, the first car produced in Oshawa. The vehicle cost $1,400 when first sold – a windshield and a top cover were optional add-ons.