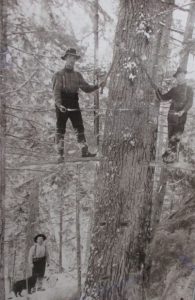 Falling a tree using a springboard 1898

To fall the trees, loggers inserted a springboard into the tree a couple of metres above the ground.  Two axe men stood on the board and chopped at the tree with heavy, double-edged axes. They also used long hand-operated saws with handles at each end.  In the 1930’s, the first mechanical saws were introduced.

These saws were heavy, awkward two-man contraptions that were soon replaced by lighter saws that one person could operate.

The biggest impact to Lumby’s logging industry was the building of the Canadian transcontinental railway in the late 1800’s. 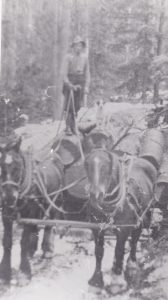 Special timber harvesting rights were issued to local timber companies to produce railway ties and other critical building materials for the railway.

The railway line to Lumby was laid out in 1919, but not officially built until 1925.  The coming of the railway to Lumby made it possible for sawmills to expand and ship their products to new markets.

Eventually horses were replaced by trucks to transport the logs to the mill.  Soon logging and pole production became the leading industry and employer in Lumby. 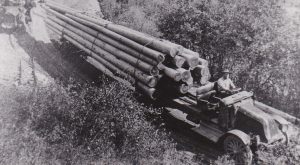 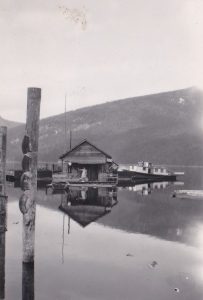 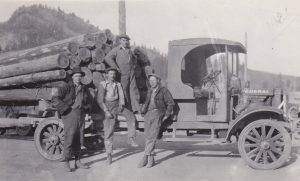