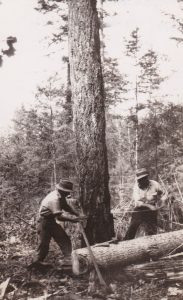 Life for the early pioneers was difficult and many suffered hardships, both physically and mentally.

Travelling anywhere was either on horseback or on foot using rough wildlife trails.  There were no roads!  Communication between communities and families was slow and unreliable.

The first homes were primitive with mainly homemade furniture and few amenities.

The men were very busy, working long hours clearing land and building a home for the family.  The valley had an ample supply of fish and game making it fairly simple to provide food to the family.

Isolation was a cause of much anguish and misery for some.  Women in particular suffered from loneliness and homesickness.  But in true pioneer spirit, most women overcame their sadness and worked alongside their husbands, helping in the fields and working at countless housekeeping tasks of the time.  Once a year the family would travel to Vernon to buy supplies – flour, tea, coffee, sugar and salt – spending only approximately $100.00 for the entire year’s provisions!  Everything else the family needed was made (clothing), grown (vegetables and fruit), caught (fish) or hunted (wild game).

There were no doctors in the early days, and getting help for a medical emergency was a challenge.  In the late 1890’s, Lumby was fortunate to have a trained midwife, Elizabeth Inglis, who served as doctor, nurse and midwife for the whole area. Elizabeth would deliver a woman’s baby and care for the new mother until she was ready to go home. Some say Elizabeth Inglis delivered over 100 babies in her lifetime!

As Lumby was a relatively small community, it wasn’t long before new friendships were made and life became much more enjoyable.  Social events, sports activities, socials, and dancing provided many hours of enjoyment for the growing community of Lumby.