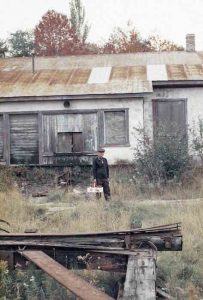 Although business was booming and navigation in Northern Canada and the construction of a large-scale fleet continued unabated, the Chantiers maritimes de Charlevoix shipyards were now on their last legs. The company ceased its activities in the early 1970s as its shares were bought back by Captain J. A. Z. Desgagnés. The Mont Royal and Mont Notre-Dame, which were still the property of Transport Desgagnés, were laid on the keel blocks for the last time, whereas the Mont Ste-Marie was run aground on a nearby beach. 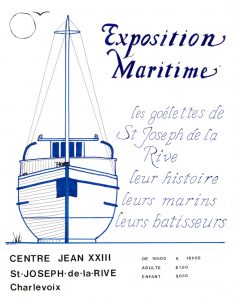 Original poster for the Exposition Maritime

As the tall grass started to overrun the old site, a few members of the Saint-Joseph-de-la-Rive community came together to preserve the village’s maritime heritage.

In 1978, Hubert Desgagnés, Roger’s son, spoke to the town council about organizing a permanent exhibit on the wooden schooners of the St. Lawrence River. The goal was to protect and preserve the region’s maritime heritage and unearth the artifacts that lay dormant in homes around the village.

Marie-Paule Gaudreault, wife of the town baker, and Carole Giasson Desgagnés, a captain’s wife, pooled their resources and efforts. They mobilized the whole community in order to organize a permanent exhibition. Bringing together artifacts from basements and attics across the village, L’Exposition Maritime was inaugurated in the summer of 1981, in the old Jean-XXIII School.

The creation of Groupe Desgagnés Preserving our heritage