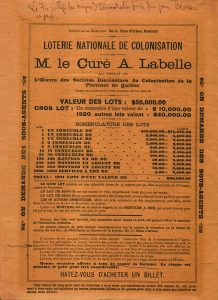 One of Labelle’s most original undertakings was his national colonization lottery, better known as Curé Labelle’s lottery. Its purpose was to build up a reserve fund for settlement and the establishment of new parishes. In 1884, cash lottery prizes were prohibited. On three occasions, Labelle tried to have the legislation amended, but was unsuccessful. A witness reported that when one of Labelle’s requests was rejected, he yelled “Damn fools!” before the Legislative Council Chamber. 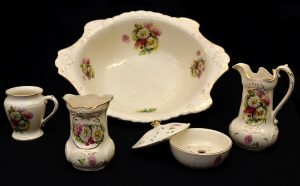 He was very proud of his lottery, as he had every right to be. He was the first to hold draws continuously on scheduled dates. He created two series of tickets: one priced at a dollar and a second, for the less well-off, priced at 25 cents. He showed himself to be an astute “marketing strategist” well before the term was invented, doing an excellent job of gauging his product and his clientele. His lottery was so successful “that it gave rise to competition, plagiarism and even poaching.” Curé Labelle’s lottery was one of the most impressive commercial successes of 19th-century Canada.