Exterior of the first church in Saint-Jérôme, demolished in 1902

Curé Labelle was a deeply religious man. But his cassock hid several different Labelles: the farmer, the politician, the businessman. Sometimes, during a sermon, it was the farmer who addressed the parishioners, as one of them recalled: “I still remember your sermon in which you spoke so eloquently and poetically about cows, cheese and manure!”

Transcription of the video: A Curé Like No Other

Young people in the parish enjoyed noting the changing expressions and moods that played out on the priest’s face when he said Mass. As his head was always brimming with settlement plans and all the things he needed to do, it’s not hard to imagine that some days, Divine Office must have been conducted “efficiently” and in record time. In spite of his many distractions, Labelle was totally devoted to his parishioners. Extremely generous and quite unconcerned about his own appearance, he once returned to a parish widow the money she had given him to buy a “less worn” cassock.

Transcription of the audio: Letter from Curé Labelle to Joseph-Octave Paré, January 17, 1876 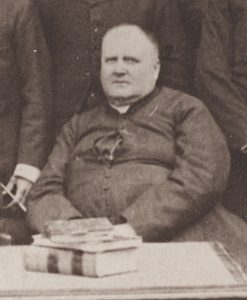 Curé Labelle and his worn cassock

A clergyman, Labelle did not revere his own person. His faith, his convictions and his loyalty to his Mother Church were sincere. His unique personality made him an extraordinary, colourful, sometimes irascible man, but one who was always attentive to his parishioners. They, in turn, appreciated his simplicity and authenticity.