Gilles Gagné, President of Gagné Lessard Sports Inc. (captions available in both FR and EN). View this video with a transcript (EN).

Gilles Gagné began to build his dream machine in 2004, the machine that would become the famous G-Force One. He surrounded himself with a team that included friends Étienne Crevier, Robert Verronneau, Stéphane Devost, Francis Morin, Dany Jacques, Francis Riendeau, Martin Grégoire, Donald Gauvin and Jonathan Lessard.

Gilles’ dream all began when he was 14 years old. While watching television, he saw a motorcycle race on the salt flats of Bonneville (USA, Utah). He was very impressed. He realized that this was what he wanted to do! After graduating from school at 17, he began to work with motorcycles and snowmobiles. Over his career, he built and adapted racing cars for several champion racers. When Gilles turned 50, he felt driven to turn his almost 40-year old dream into a reality.

In 2005 he took a trip to Bonneville, the Mecca of racing. It’s the place where world speed records are set, but he couldn’t find a single snowmobile. He consulted the rules of the International Motorcycling Federation (IMF), and spoke with its head official, Charles Henekam, about it. Then as soon as he got back home again, Gilles began to draw up plans for his own racing snowmobile. He asked Camoplast (a company now known as Camso) to build the vehicle’s track, its main component. He decided to use a Yamaha snowmobile with a 1-litre, 4-cylinder engine. He adjusted the machine to improve its aerodynamics, and made it as fluid as possible when its size and its driver, Francis Morin, were taken into account.

Getting the G-Force One Snowmobile Ready, 2009

The road to Bonneville was not without its challenges. Although the vehicle was finally ready by 2008, no promoter at Bonneville seemed to want it. It was refused five times. Gilles Gagné finally found some interest on the part of the promoter of the Mike Cook Shootout. This is the most prestigious race at Bonneville. It brings together the 10 teams that are the most likely to break world speed records in their respective classes. Mike Cook wanted a demonstration before making a decision. So they did a trial on the runway of the airport in Val d’Or, in September 2008, that clocked at 338 km/h. This was all Mike Cook needed to invite the G-Force One team to take part in the 2009 edition of his Shootout.

The G-Force One participated in its first competition at Bonneville in September 2009. Its first race was disastrous. Undeterred, the G-Force One team persevered. They finally achieved an amazing feat. The G-Force One—a vehicle made in Quebec, by Quebec’s own Gilles Gagné—broke a new world record as the fastest vehicle, recognized by the IMF. It set the record of 326.547 km/h.

That record still stands and it still hasn’t been beaten, even today! 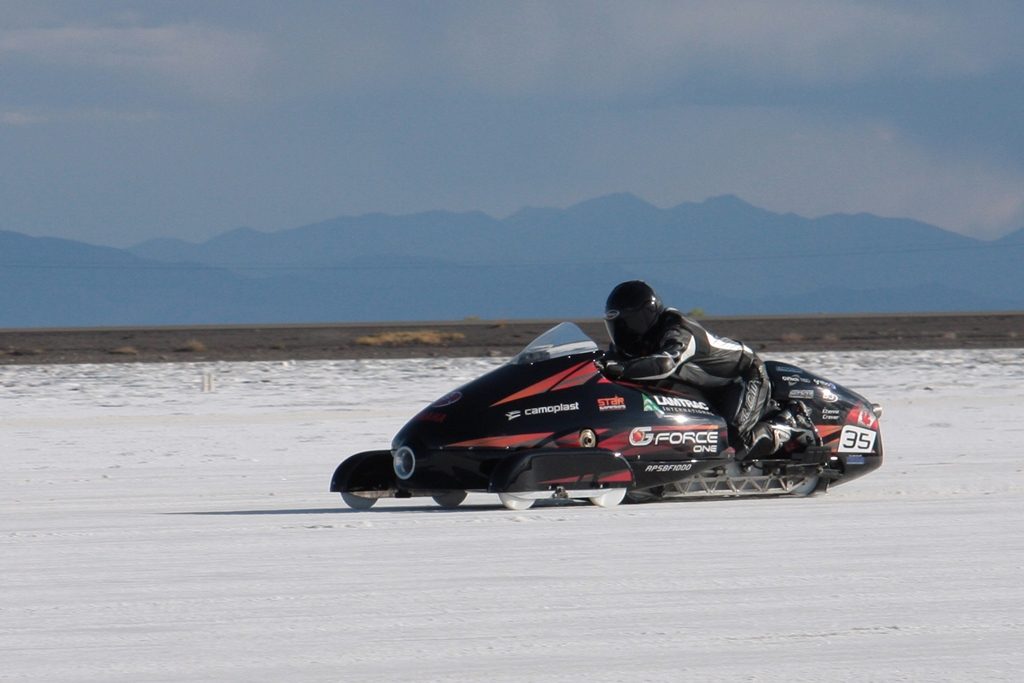 The G-Force One Snowmobile in Action, 2009