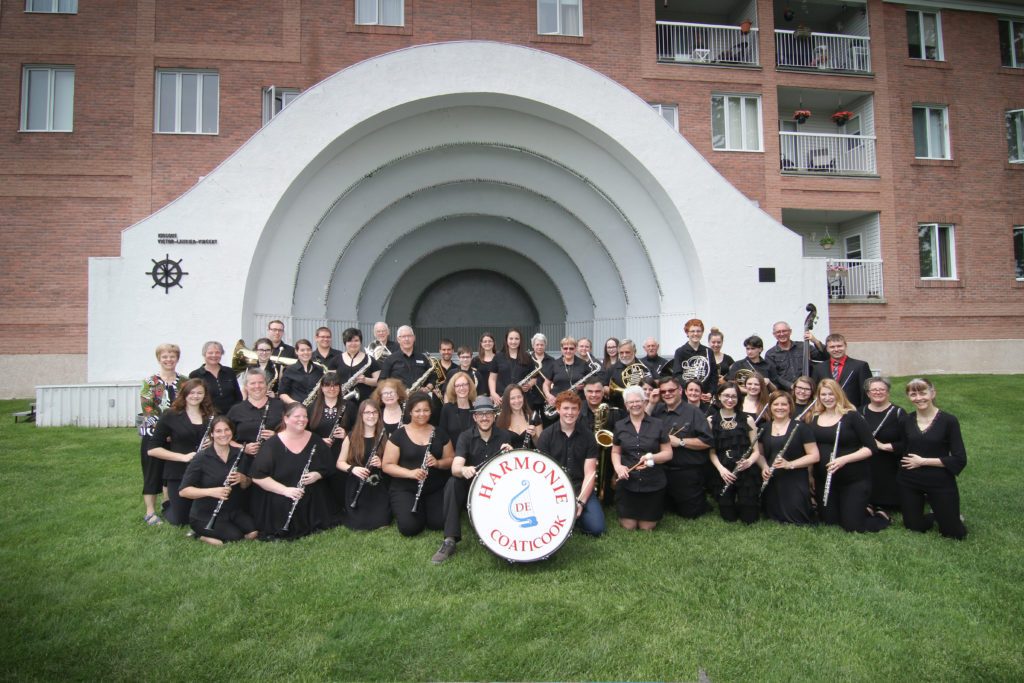 Musicians of the Coaticook Harmony Band, 2016

If the Harmony Band has been able to survive for over 150 years, it’s due to the support of the town of Coaticook, and of many devoted people, such as its musical directors, its musicians, and most of all, the support of its loyal audience.

Formed in 1868, the Harmony Band of Coaticook is the oldest concert band in Quebec. In fact, it is still performing today. Although it’s impossible to say for sure, there are many clues that show its foundation as early as 1856. The band has evolved a lot over the years, achieving an iconic status today.

Michael Dougherty, Past President of the Coaticook Harmony Band (captions available in both FR and EN). View this video with a transcript (EN).

It was the idea of Victor-Laurier Vincent, the musical director at the time, to bring in a corps of majorettes. The first group of majorettes had their official debut in the summer of 1950, under the direction of drum major Robert Huard.

The band continued to grow, and under the presidency of Michael Dougherty in 1992, they embarked on a first cultural exchange with the Harmony Band of Jallais, France, which was under the musical direction of Yann Kermanac’h. The band made their first trip to Jallais from June 25th to July 13th, 1993. 57 people went on the exchange, of whom 45 were musicians. Ever since, the links between the two bands have continued to be fostered and have grown stronger.

Welcoming the Coaticook Delegation at the Jallais Town Hall (France), 2016

An experiment that was ahead of its time made its mark in 1999. The Coaticook concert band invited young musicians to participate in a musical summer camp. Many young students participated, having a wonderful time. François Moreau was one of the first young people to take advantage of that opportunity to learn.

In 2012, as part of the planning and preparations for Coaticook’s 150th anniversary celebrations in 2014, Michael Dougherty came up with the idea for a time capsule. A partnership with the Coaticook Historical Society, presided by Carmen Michaud, was set up. The project was brought to fruition and presented to the public on September 12th, 2014; the capsule was buried 10 days later, on September 22nd at Chartier Park, and scheduled to be opened again a hundred years later, in 2114.

A Blend of Engineering, Nature and the Arts Celebrities and Famous Artists