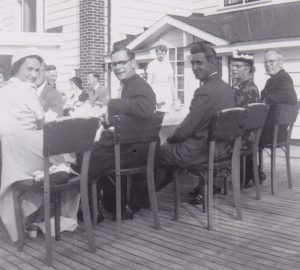 Father Marrocco (2nd from left) is joined by Gerry Clarke (centre) and other members of the Marrocco Homebuilding Co-operative at a gathering following their build in 1956.

The Grimsby Homebuilding Co-operative was not the only one of its kind in Ontario. For example, students at the Institute of Social Action in Ottawa had already formed the Marrocco Homebuilding Co-operative Society after Father Marrocco challenged them to use the guide they had written. This was the “flagship” co-op homebuilding group. The students built 34 homes across the river in Lakeview Terrace, Deschênes, near Aylmer (Gatineau, Quebec).  The homes were interspersed with those of Veterans Land Administration (VLA) residents. Today, the vibrant community still acknowledges this rich heritage. 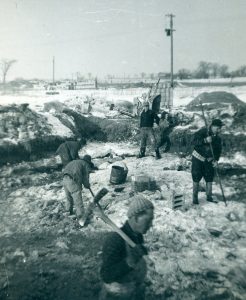 From Parkdale to Wildfield. In the winter of 1955, co-operators worked even in snow, driving more than 40 km from Parkdale in west Toronto.

In August 1954, the 16 Maryknoll subdivision families in Lindsay moved into their co-operatively built homes. It was in Lindsay that the Grimsby homebuilders discovered the 4-bedroom house plan. The Lindsay builders shared that plan, in the true spirit of co-operation. It was known ever after as “The Lindsay.”

In Toronto, 14 families from the Parkdale neighbourhood formed the Family Home Builder Co-operative Ltd. and purchased land from the Catholic Archdiocese in Wildfield near Brampton.  Using the same “sweat equity” methods, the families built their houses together on 1- to 2-acre lots on Marysfield Drive. Their subdivision was shaped like a rosary, in a testament to their faith. 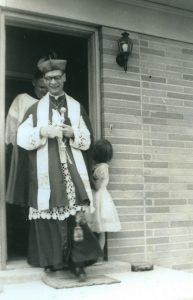 In the fall of 1955, Father Marrocco seen in the doorway following the blessing of the Finlay home on Marysfield Drive, in Wildfield near Brampton. 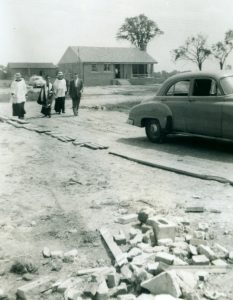 Father Marrocco, 2nd from left, and fellow priests blessed each of the 14 homes in 1955.

In Hamilton, several co-op people knew each other from their workplaces, where the homebuilding message spread effectively by word of mouth. Harry Day of the Sherbrien Co-op in Greensville (in Dundas, Ontario) recalled knowing Bob Walsh of the Grimsby Sherbrien Co-op. Walsh, he said, was “known as Mr. Co-op.” The Greensville group built differently, starting with prefab buildings. They provided the labour by working for the contractor as employees. 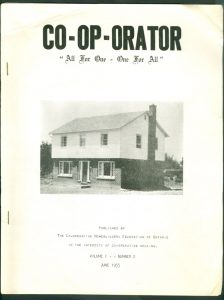 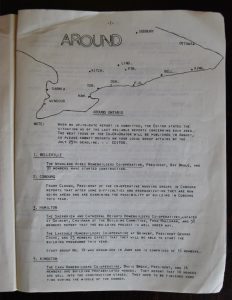 Eight hundred families built “sweat equity” homes throughout Ontario in the 1950s. These included areas in Peterborough, Kingston, Sharon, Oshawa, and Orillia. Their stories are included in the book, The Light from One Candle, by Rita Larsen Marrocco.

Don Gay – Lindsay: sharing their house plans (subtitles available in FR and EN).  Watch the video with the transcription (EN).

Harry Day – Knowing Bob Walsh of the Grimsby Co-op  (subtitles available in FR and EN).  Watch the video with the transcription (EN).