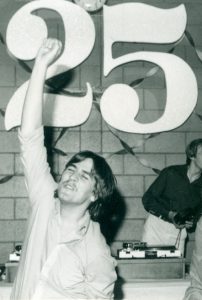 The 25th anniversary in 1981 was when many of the children raised in the co-op learned much more about the huge project their parents had undertaken in the 1950s. This discovery would be repeated in the lead-up to the 60th anniversary in 2016 when one adult grandchild, on hearing about the co-op build, would turn to his Mom, a co-op kid, and exclaim, “Why didn’t you tell me about what Grandma and Grandpa had done?” That co-op grandchild decided to learn more. He made a short film that became the centrepiece of the 60th anniversary Sweat Equity exhibit. 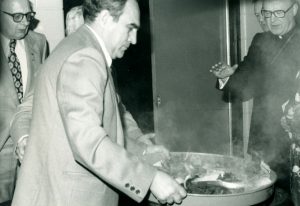 Mortgage burning and dancing were the evening highlights at the 25th anniversary celebration on November 6, 1981.

The 25th anniversary celebration in November of 1981 was an opportunity to bring co-op builders and their families together. People broke bread and danced all evening. For some, it was a chance to publicly burn their 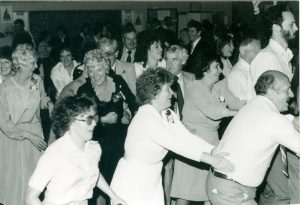 They danced in celebration.

mortgages. Could they ever have imagined all those years ago, when they had no hope of owning a home, that 25 years later they would own a place they had helped to build with their own hands?

On the 50th anniversary, a few co-op parents organized a gathering by the waterfront for 31 of the original builders and their families. The women had prepared refreshments, and after the meal came the speeches. John Blake then led the co-op parents in a rousing version of the “King of the Shingleers” song. The group photo appeared in the local newspapers. John Dalgleish’s homemade sign was a perfect tribute to this milestone. 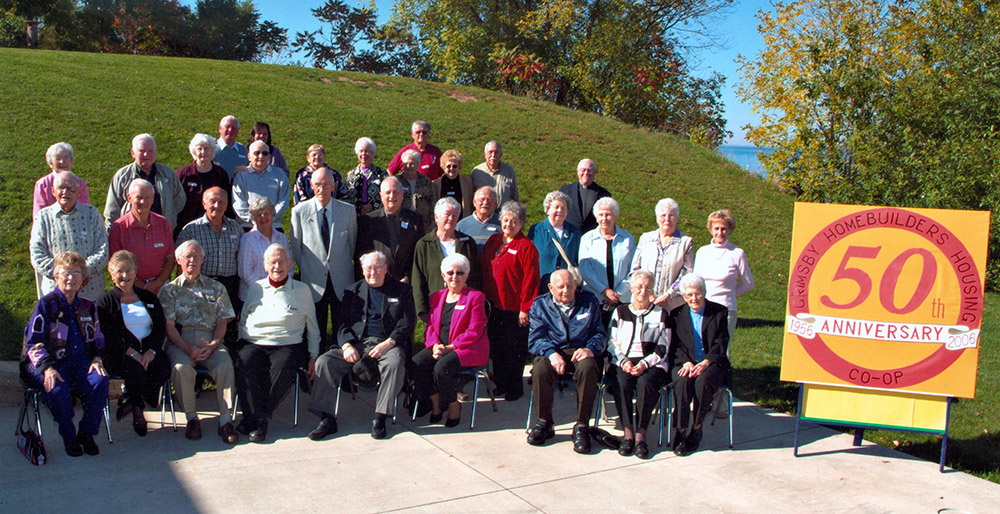 The original builders gather in 2006 at their 50th anniversary celebration.

That so many of the original builders remained in the neighbourhood is a testament to the commitment they had to it and to the comfort they felt in this place, with these people. Many continued to enrich Grimsby well into their 80s. It was on the 60th anniversary that the builders themselves were honoured by their children. What began that day as a day-long celebration soon became a three-month exhibit at the local Grimsby Museum. 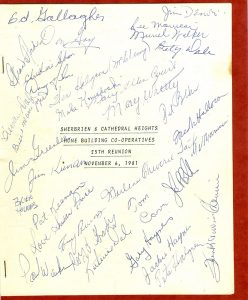 The 25th anniversary itinerary included two of the original builders’ reflections on their co-operative homebuilding venture.