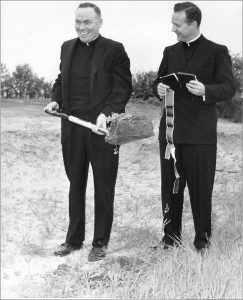 Father O’Brien and Father Sherlock of Hamilton, at the Greenville Co-op near Dundas, Ontario 1957.

“Get cracking on the social teachings of the Church.” “Learn more about co-op housing.” These were the directives from Father Francis Marrocco in 1952 to two of his former students, the newly ordained priests Fathers O’Brien and Sherlock of Hamilton. Hoping to improve the living conditions of their parishioners, the two men committed to taking on the challenge.

The average annual wage for an industrial worker in Canada at the time was $4000. The cost of a small home in Hamilton was around $19,000. With interest rates as high as 40%, loans were largely unattainable. Working people needed to find an alternative. 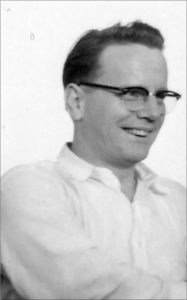 Bob Walsh of the Sherbrien Co-operative helped write the article inviting Hamiltonians to learn about co-operative homebuilding in 1953. 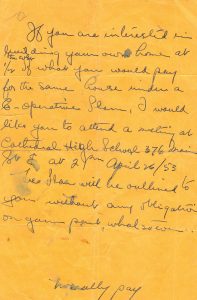 The handwritten announcement for local newspapers.

In June 1953, Father Marrocco invited the two priests to visit the site where some of his adult education students were building homes together.  The students were part of the group that had created A Guide to Co-operative Housing in the summer of 1952 – an invaluable tool for advancing the co-op movement. Notably, the Central Mortgage and Housing Corporation, now the Canada Mortgage and Housing Corporation, also helped. They had agreed that the co-op builders could use their own labour as equity for the necessary down payments. This was known as “sweat equity.” 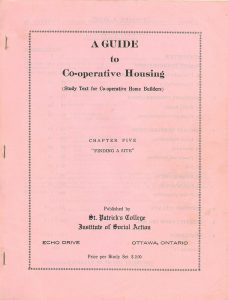 Chapter 5 of the Guide to Co-operative Housing published in 1953, would help with the challenging task of finding a suitable site on which to build their homes.

Father O’Brien and Father Sherlock returned to Hamilton with the guide in hand. For the people of the Grimsby Co-operative, the guide made all the difference. It developed participants’ understanding of co-operative values and gave them the practical knowledge they needed to succeed. The values and knowledge they gained, combined with their own “sweat equity,” allowed the group to embody Father Coady’s notion of becoming “masters of their own destiny.” 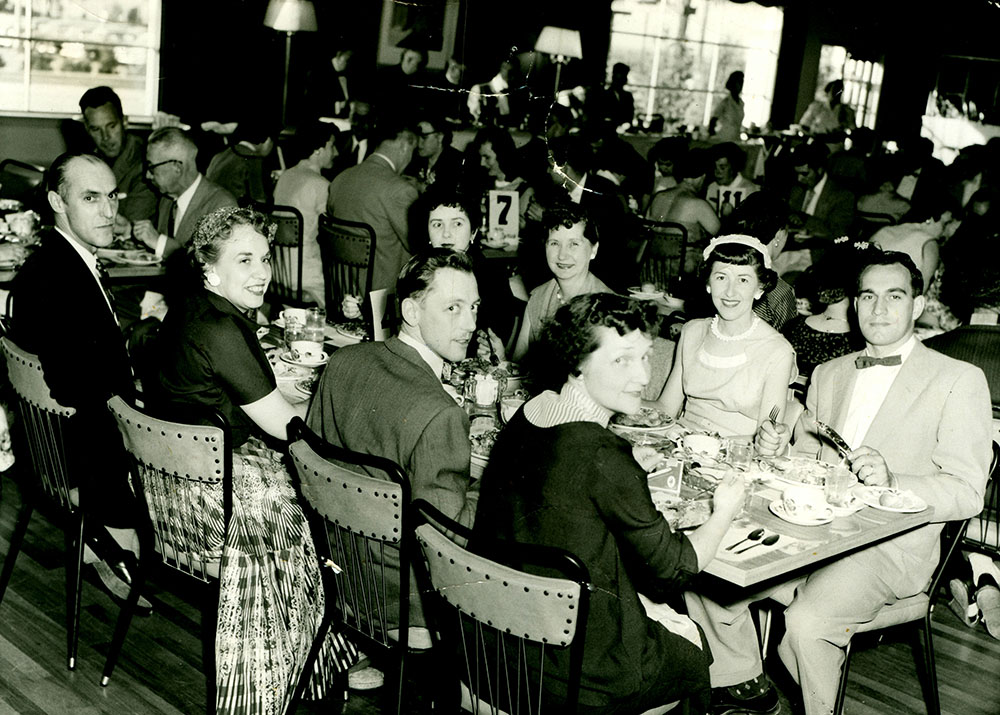 After a year of study groups and meetings, a social evening for couples was welcome. This was the Sherbrien and Cathedral Heights co-operatives circa 1954. The Lakedale co-op would join them soon after to build on land in Grimsby.