As families prepared to move from Hamilton to Grimsby, they sought local faith communities. Many members saw community participation as an extension of the values and skills they had learned in the co-operative homebuilding course. 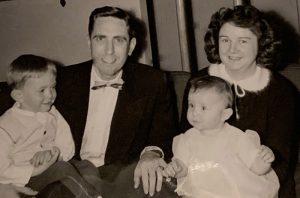 John Dalgleish and his wife Margaret with their children. They founded and remained leaders in the Pentecostal Church in Grimsby.

The Lakemount Worship Centre, for instance, began in the home of Marg and John Dalgleish. Other co-op members joined local Presbyterian, United, Anglican, and Mormon churches, as well as the Catholic church. 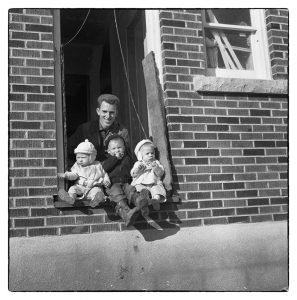 Derwyn Hill and sons Gordon, David and Gregory. With the house almost completed, the family awaits back steps.

Members of all churches often became involved in auxiliary groups, leading youth groups and leadership courses such as the Christopher Leadership Course at St. Joseph’s Roman Catholic Church. Years later, St. Joseph’s Parish would ordain as a priest, the son of a co-op family.

According to the co-op survey, 60 families, or 200 people, arrived in the parish between 1955 and 1956. The Catholic church on Patton Street, built in 1866 with a capacity of 185, soon became too small for the growing community. Lex Duncan recalled, “We overloaded the small church. We stood outside on the sidewalk to hear Mass.”

Co-op members helped fundraise for a new building. In 1956, a new, temporary St. Joseph’s Church was completed on Robinson Street, on the new Catholic elementary school lot. In 1994, some of the same families helped build a permanent church. 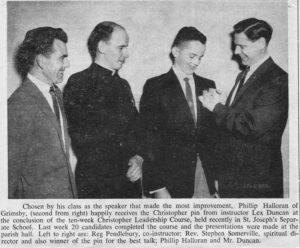 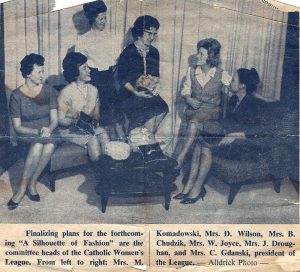 The CWL (Catholic Women’s League) fundraising fashion show was a popular event in the 1960s in the St. Joseph’s Church parish.

According to a co-op member, it wasn’t until parents chose a school for their children that the co-op members’ denomination became known. For public school students, Lakeview School, built in 1958, was a few blocks away.

Lakeview Public School on Olive Street was located at the top of Stewart Street. For many of the co-op children, it was a just a few blocks from their homes.

For Catholic students, St. Joseph’s Separate School was a mile from the co-op neighbourhood. It had opened in 1954 with just six rooms, but with the increase in co-op student enrolment, space had to be leased in community halls. In 1969, a new separate school, Our Lady of Fatima, was built in the co-op families’ neighbourhood. 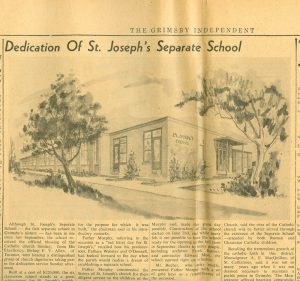 St. Joseph’s Separate School opened in 1954 and was the first Catholic elementary school in Grimsby.

In 2016, co-op sons and daughters celebrating the 60th anniversary of the co-op were delighted to meet two of their Grade 1 teachers, who had come to attend the event. It was a testament to the connection that some felt to the church and school community.