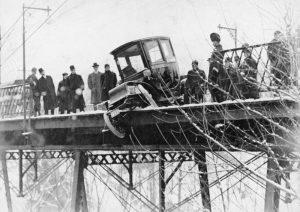 For all that they were safer and easier to use than gasoline cars, electrics were not accident-proof. A Detroit electric crashed on Toronto’s Glen Road Bridge, 1912.

The years before the First World War seemed like a golden age for the electric vehicle. They had established their niche as the city car and utility truck of choice, and were selling well. During this time period numerous Canadian and U.S. companies either started their own electric car businesses or attempted to expand their businesses into Canada. The prosperity, however, was short-lived.

Tate: a near success

Founded in 1910, the Tate Accumulator Company of Windsor, Ont., produced the popular Tate Bifunctional Accumulator, a very successful car, boat, and industrial storage battery. With a customer base across Ontario and Quebec, Tate was a success story in the early Canadian electrical industry. 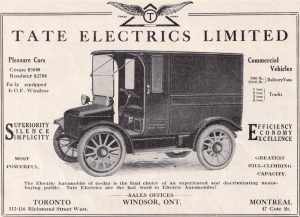 An ad for Tate trucks from 1913, highlighting the company’s many different vehicle options.

Looking to diversify its portfolio, the firm began developing electric cars in 1911 and purchased a factory in Walkerville, Ont. By 1912 Tate Electric Limited was in existence and showing vehicles at that year’s Montreal and Toronto auto shows. Sales began in earnest soon afterwards, across both Ontario and Quebec. 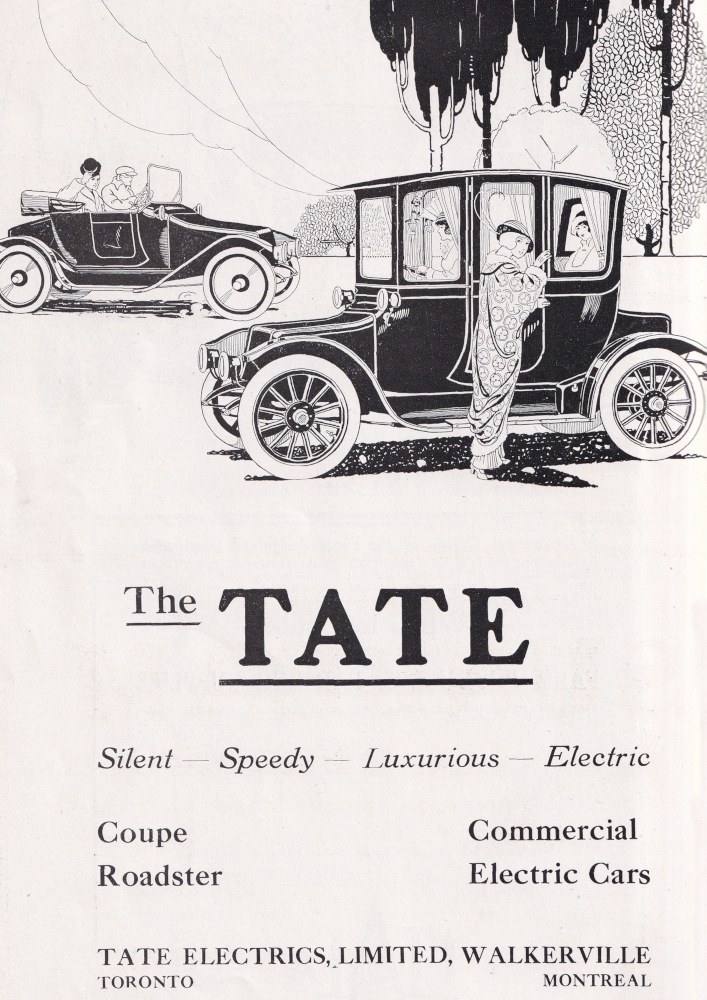 As the electric car industry shrank in the early years of the First World War, Tate began marketing sportier and faster cars, as seen in this 1914 ad.

Tate quickly distinguished itself with its range of products; by 1913 the company was offering electric coupes and roadsters at reasonably competitive prices, along with four different models of electric truck, with customizable engine and wheel options.

Despite a well-established network of distributors, a respected brand name, and strong financial support, Tate was out of business by early 1915.

Peck: too luxurious to win

By all accounts the controls and reliability of the Peck car lived up to the hype, but it remains unclear how many “nervous women” actually bought them.

Toronto inventor Frederick G. Peck had made his living off a series of electricity-related patents and sometime before 1911 turned his attention to the designs of an electric car. With financial backing from several local investors, he founded Peck Electric Limited in a garage and factory space on Jarvis Street in Toronto, displaying his first Peck electric car at the 1912 Toronto auto show.

Peck knew the target market for electrics well, and the vehicle was designed with luxury from the bottom up. It was built for exceptionally smooth acceleration and handling. Among its many convenience features were an adjustable steering wheel, probably the first ever sold on a commercial vehicle. Its advertising and $4,000 sale price were aimed firmly at affluent Toronto city-dwellers.

The car that “Keeps Pecking” was not long for this world. Although Peck briefly offered an electric roadster in 1913, the company had been driven out of business by the end of that year.

Based out of Cleveland, Ohio, the Rauch & Lang company, or R&L, was the manufacturer of the most luxurious electric cars in the United States, popular with high society on both the east and west coasts. It was only natural that the firm would extend its sales north of the border, teaming up with Canada’s most luxurious and prestigious car manufacturer, the McLaughlin Motorcar Company of Oshawa, later General Motors of Canada.

McLaughlin’s V6 Specials were cars for the upper classes, and their high polish and craftsmanship dovetailed well with R&L’s brand. In 1911 McLaughlin heavily marketed R&L electric coupes at a starting price of $3,400 from its dealerships across Ontario. While it remains unclear exactly how many were sold, the deal was quickly dropped in 1912. Rauch & Lang would continue making cars, going out of business in 1923. 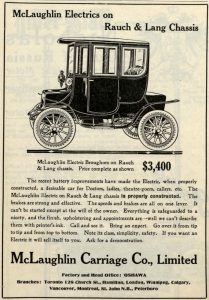 For much of 1911, it was difficult to read any major Ontario newspaper without seeing ads for McLaughlin’s “new” electrics.

There were several other lesser Canadian electric car attempts in this period, but all had vanished from the market by 1915. All were victims of several unrelated technological, social, and cultural developments, many of them connected to the outbreak of the First World War.