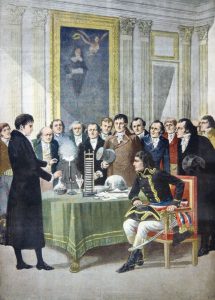 The history of electricity begins long before the history of the electric vehicle, in Canada and elsewhere, and is as full of twists, turns, and branching paths as a bolt of lightning. To make the electric car, three technologies needed to come together: the battery, the electric motor, and the carriage.

1800, Italy: Alessandro Volta invents the voltaic pile, the first battery. It uses zinc and copper soaked in salt water to generate electricity, but cannot be recharged.

1821, England: Michael Faraday invents the principles of the electric motor by demonstrating that the combination of magnets and electric current moving through wires can turn electrical energy into mechanical energy.

1828, Hungary:  Ányos Jedlik creates a machine that spins when powered by a one-way flow of electric charge – what we now call a direct current (DC) electric motor. 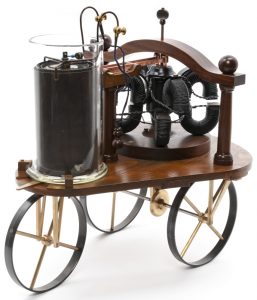 1834-1836, U.S.A: Thomas Davenport builds the first electric motor in North America and uses it to power a small railway cart.

1859, France: Gaston Planté invents the lead-acid battery, which can be recharged between uses to store power for long periods of time.

1881, France: Gustave Trouvé of Paris builds a passenger-carrying electric car with a rechargeable battery. The vehicle is a tricycle fitted with a motor built by the German Siemens company. 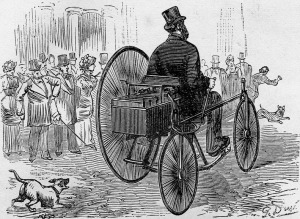 You may be wondering, “Who built the first ‘real’ electric car?” The answer is difficult to determine. Dozens of different scientists and inventors were working on electric cars in the 1880s and 1890s, often in competition with each other, and out of national pride many countries claimed their inventors as the “first.” There is also the question of just what an electric car is. Does it need rechargeable batteries? Is a carriage with a motor attached a “car”? Does it need to have four wheels? Does it have to have been built from scratch? Does it count if it wasn’t sold to the public?

Thankfully for Canada, the history of this country’s first electric vehicle is a bit more cut and dried. 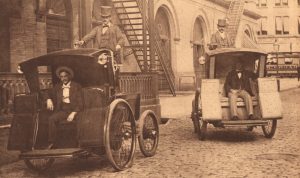