A Westinghouse Markette electric car being driven at the 1967 Canadian National Exhibition (Captions available in both English and French). View this video with an English transcript.

The development and sale of electric vehicles during the Cold War were the exception, rather than the rule; gasoline continued to rule. Still, the growing prestige of cutting-edge science and technology, especially military technology, inspired some interesting one-off or limited-production vehicles.

The Henney Kilowatt promised to do away with the dangers and complexities of gasoline car maintenance; it offered performance at a reasonable price.

The most substantial electric manufacturing effort of the 1950s came from, of all things, the slow failure of one of North America’s most prestigious luxury car companies, Packard. For decades Packards had been the cars of presidents and celebrities, but by the early 1950s the company was deep in the red. The Henney Motor Company, a longtime Packard affiliate, was looking to get out before Packard fell apart and used a 1953 merger with the National Union Electric Company as an opportunity to try something new.

The end result, dubbed the Kilowatt, was a modestly powerful electric. It could manage a range of 64 kilometers at a top speed of 64 km/h. A later 1960 upgrade package boosted this to 96 kilometers at 96 km/h. Yet the Henney company did not achieve much of a distribution network – it only ever built 100 Kilowatts, selling 47 of them. With a steep base price of $3,600 U.S., the Kilowatt just wasn’t worth it, and Henney dropped the project.

Nickel-silver batteries were invented in the 1930s. That was too late for the height of the electric car industry, but their high-energy density and light weight attracted a great deal of interest in military and scientific circles. Nickel-silvers were soon found in missiles, space probes, and a huge range of advanced equipment.

In 1960 the California-based Nic-L-Silver battery company tried to employ this powerful technology in a sleek new way. It used the 1958 Alken as a basis; this was a kit that turned a Volkswagen Beetle into a surprisingly speedy rear-engine sports car by giving it a sleek, ultra-light, all-fibreglass body. 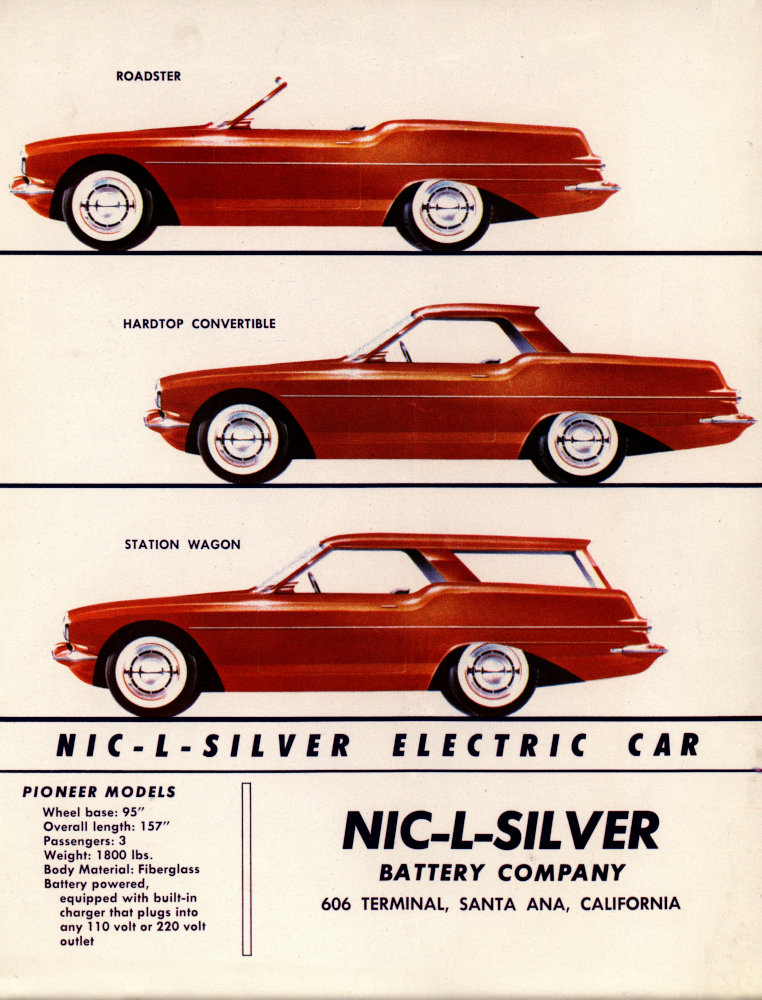 Three different body styles for the Pioneer. Only the Roadster models were ever built.

With 12 nickel-silver batteries in the trunk and an 8-horsepower electric motor at each wheel, the Pioneer combined all the style and sports-car buzz of the Alken with excellent performance. It could manage a top speed of 80 km/h with an advertised range of 240 kilometers, rivaling even some modern electric cars. With a sale price of $1,995 U.S. and a predicted battery life of three years, the Pioneer seemed like a reasonable proposition. Despite high public interest, only three Pioneers were built, and none were ever sold.

The reason for the failure of the Pioneer project is vague, but it may have something to do with the batteries. Although light and efficient, nickel-silver batteries do not respond well to constant discharging and recharging; the actual range and lifetime of the car might have been considerably less than advertised.

This 1966 filmstrip, which focuses on the Electrovair II’s performance and limitations, shows it being driven at the General Motors Technical Center in Warren, Michigan. (Captions available in both English and French.)  View this video with an English transcript.

In the mid-1960s General Motors embarked on a series of high-profile demonstrator cars that would showcase the company’s advanced technology, originally developed for the Space Race. The two Electrovairs, built on the chassis of the rear-engine Chevrolet Corvair, were the most high-performance electrics of the time.

The company chose the Corvair platform for several practical reasons. It was lightweight, and its rear-mounted engine design gave plenty of room for a big battery bank. On the financial side of things, Corvairs were selling poorly, which meant that the firm had plenty of spare parts and chassis available for the project. The silver-zinc batteries chosen provided 300 per cent more energy density than did the same volume of lead-acid batteries, though at an astronomical cost of $160,000 U.S. per battery pack. 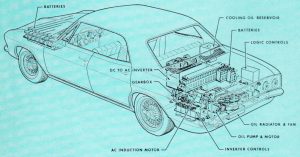 The complex internals of the Electrovair II, which crammed as many batteries as possible into an overloaded Corvair chassis.

The improved Electrovair II was as powerful as any sports car on the road at the time. Its 115-horsepower engine gave it a top speed of 129 km/h, with a range of up to 128 kilometers. Due to the weight of the batteries, though, its acceleration was poor, and the silver-zinc cells degraded quickly, with a lifespan of around 100 charges per cell.

The Electrovairs were never commercial projects. Along with their sister project, the hydrogen fuel-cell Electrovan, and a series of ultra-small “Experimental Urban Cars,” they were intended to show off the engineering capabilities of General Motors. In an era of big cars and low gas prices, there was not much of a demand for electrics.

During the late 1960s, General Motors built ultra-compact “Experimental Urban Cars” using electric, hybrid, and gas propulsion (Captions available in both English and French). View this video with a transcript.

All of that changed, however, when the price of gas skyrocketed because of a war on the other side of the world.