While many community gatherings in Town Park were methodically planned, the Park was also home to more spontaneous and sometimes mischievous happenings. The Band Shell was the central place for people to meet and plan a rainbow of activities, some not so innocent.

A great meeting place if nothing else and a convenient central place for teenagers to hang out, shoot the breeze and plan a bicycle run. 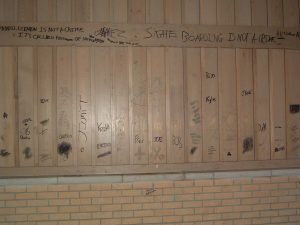 The Band Shell was often the target for local vandals who frequently shared their words of wisdom with the community. Other forms of vandalism were not so easily remedied as was the case with the newly erected flagpole in Town Park. 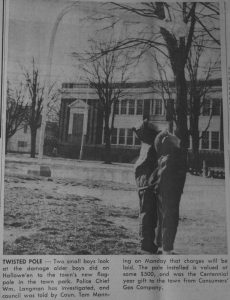 The strength of the pole was put to the test on Halloween evening in 1963 as John Anderson remembers:

An overly exuberant vandal (a spoiled rich kid who shall remain anonymous) decided to show off the power of his little sports car. He raised a rope to the top of the flag pole in front of the stage and bent it totally down to almost touching the ground.

Live at the Armoury! Summertime Fun