For a while Town Park had both a hardball diamond, located between the Armoury and the Band Shell, and a softball diamond that still exists in the southwest corner. 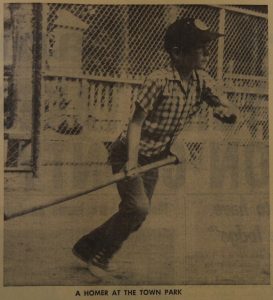 By the mid 1960s the decision was made to remove the hardball diamond as too many balls were hit beyond the Park causing problems for cars and spectators alike. Softball continued in the Park with men, women and children all making use of the diamond. 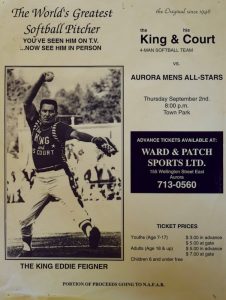 In 1993 and 1994 a remarkable baseball event occurred when an internationally known softball team came to town. The King and His Court were composed of star pitcher Eddy Feigner (the King), catcher, first baseman and shortstop (his Court). Town Park was blocked off with orange fencing, extra benches from across the town were brought in and 5,000 people came to see the King and his Court beat Aurora’s all-stars- with five less men. Doug Dakin, Aurora’s all-star team coach, remembers the game as being “the biggest baseball event that’s ever happened at the Park.”

In the late 1990s the power of the hitters was again cited as the main reason to remove the men’s team from Town Park and since the men were unable to find a comparable home they disbanded completely. In an effort to carry forward their legacy, the ladies’ team re-named themselves the Mud Hens- the old name of the men’s rep softball team. The Aurora Ladies Softball Association has played in Town Park since the early 1970s and their Wednesday night games have become deeply entwined in the culture of the Park.

Audio clip with transcript: “The Culture of the Ball Diamond”