After the completion of the Armoury, Town Park was the natural place for large community gatherings. Politicians, keen to make inroads into this area, flocked to Town Park to discuss matters of local, provincial and federal importance. Such was the case when on October 3, 1874, Reformers of the Federal Riding of York North (now Newmarket-Aurora and York-Simcoe) celebrated their earlier victory over Sir John A. Macdonald’s government, with a picnic in the village of Aurora. 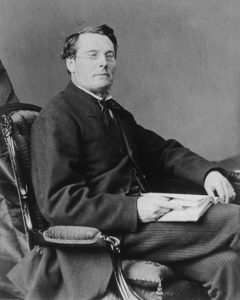 MP Dominick Edward Blake was part of these festivities and the speech that he delivered in the Aurora Armoury caused a sensation throughout the entire country. Loose planks from a local mill filled the Armoury and provided seats for the more than 2,000 people in attendance who punctuated his words with cheers, laughter and the occasional hear, hear.

Audio clip with transcript: “A National Sentiment by Edward Blake”

Later published under the title A National Sentiment the speech took nearly two hours to deliver.  Among other matters, Blake spoke of the need to reform the Senate, proportional representation and compulsory voting. His profound words marked a turning point for the nation and for Canadian identity and is regarded as a landmark in Canadian politics.

No doubt propelled by his impactful speech in Town Park, Edward Blake went on to become the Leader of the Official Opposition (Liberal Party of Canada) from 1880-1887 before being succeeded by Sir Wilfred Laurier.