By the early 1930s, Aurora was known as a doggy town due to the many kennels within its boundaries.  Town Park was the natural choice for the first open-air dog show, which was hosted by the newly formed York Kennel Club. 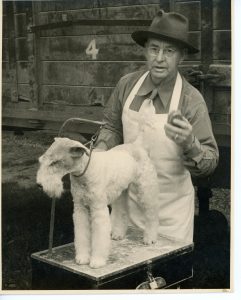 Three outdoor rings were set up in Town Park and the dogs were benched in the Armoury. The show ran from 10 a.m. to 9 p.m., and for 25 cents spectators would get the chance to see competitors from as far away as Ohio and Manitoba. The local Cousins Dairy supplied cool refreshments to the visitors while the happy and excited barks of approximately 350 dogs filled the Park.

The 1933 show broke records and it was recorded as being “the first one-day show in Canada ever to afford four championship points to its winners.” (Aurora Banner, August 25, 1933). While this Championship Point Dog Show only lasted two years the community’s affinity with dogs did not wane. 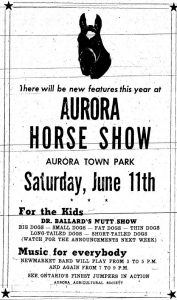 In the 1950s the newly established Aurora and District Kennel Club held dog shows in the Park until their success forced them to seek larger facilities elsewhere.  Not to be forsaken completely, the Aurora Horse Show added Dr. Ballard’s Mutt Show to their program in 1955.  While not of the same calibre, the addition was no doubt met with delighted squeals of eager children who could enter their dogs into various contests, including best dressed, longest tail, shortest tail, fastest eater and other tricks. In 1963 it was hailed as Ontario’s largest mutt show, surpassing the one at the Canadian National Exhibition, with 110 entries.