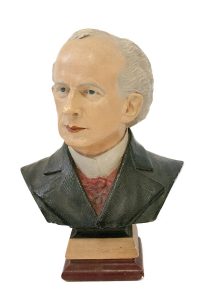 In 1893, Sir Wilfrid Laurier (Leader of the Official Opposition) visited Aurora in an event that was described as, “a magnificent introduction to the people of Ontario” (Aurora Banner, Sept 15, 1893).

Mr. Laurier and his party arrived in Aurora on the 9:50 a.m. train and were met by a committee who escorted them westward to Town Park. An elaborately decorated platform had been erected to celebrate his formal introduction to the people of this riding.

When Mr. Laurier and party stepped upon the platform the mass of people cheered heartily and the 12th Battalion Band struck up

After Mr. Laurier’s introduction in Town Park, a large procession formed and passed through Aurora’s main streets, which featured three large arches covered in flags, evergreens and political mottos. The procession ended in Mr. William’s Grove, located just south of the neighbouring Town of Newmarket, where a large picnic was held and multiple speeches were delivered.

Laurier’s visit came to be known as the Laurier Procession & Picnic, with a total attendance of approximately 10,000.  It was reported as being, “the greatest open air demonstration in the history of Canadian Politics” (Aurora Banner, Sept 15, 1893).

Mr. Laurier was triumphant in the 1896 federal election and would go on to become Canada’s 7th Prime Minister serving from 1896-1911.

A National Sentiment Off to War