Did they know that they would be the last to tame logs with pikes and misery? These men, whose hands were cracked with silence, turned the unfathomable forests into tamed cattle, leading them over the capricious waters of a spiteful river. Logs that would become the paper of poems they would never read,
I will sing the poems to them, and the river,
remorseful, will listen. 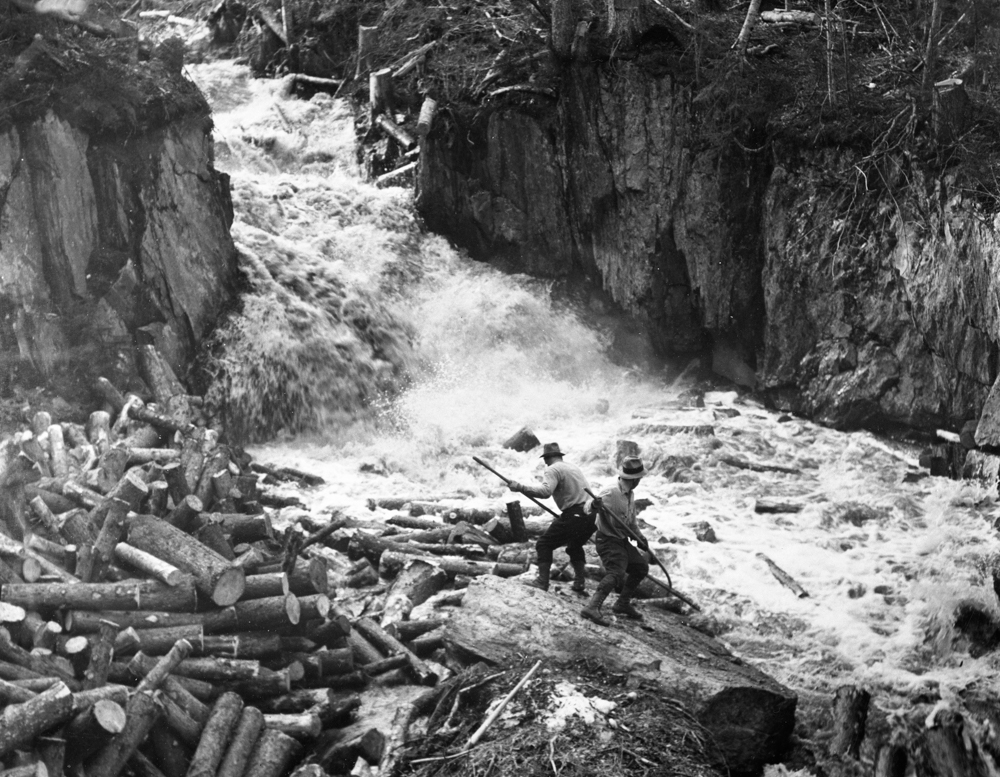 On our way down the Saint-Maurice, you may have noticed logs appearing unexpectedly here and there in front of our canoe. These logs are reminders of a time when the river was used for timber rafting and log driving.

Living on the Edge

Starting in 1888, the forestry industry began using the Saint-Maurice to carry its raw material. For more than a century, the river was full of logs being driven downstream, most of them headed to pulp and paper mills.

Log drivers faced many risks while steering logs that the current carried from the lumber camps down to the mills. Without losing their balance, they had to perform different manoeuvres using a long pole, called a pike pole, to keep the logs moving. 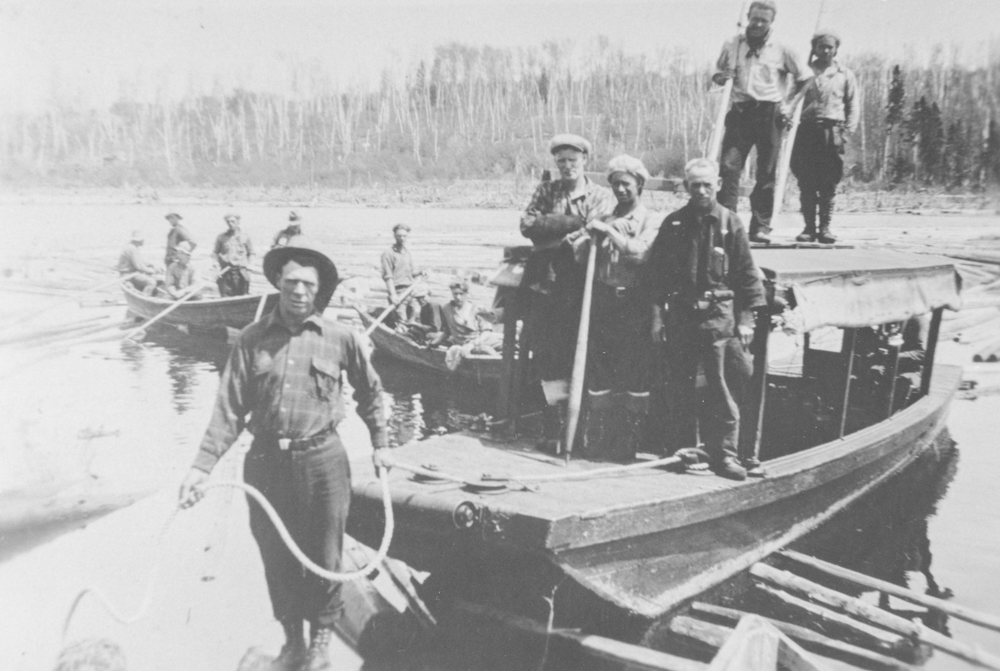 Drivers in their boats

The risk of falling into the water was considerable, and the drivers, many of whom couldn’t swim, didn’t wear life jackets. Those who lost their balance counted themselves lucky if they came out of it unharmed or only injured, as there was a serious risk of dying from hypothermia or of being swept away by the current and drowning in the swirling waters.

When logs piled up on top of one other, jams were created, sometimes so severe they could only be broken using dynamite. An equally dangerous situation was avoiding the rocks when rowing a barge through rapids, surrounded by hundreds of logs. You have to admit that we’re safer in our canoe. 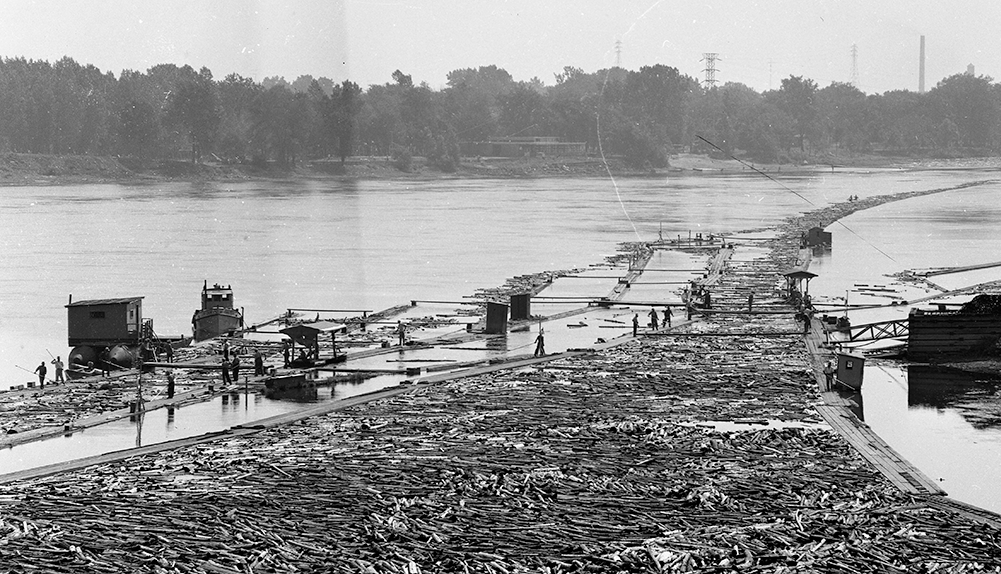 While it offered many advantages, the river also posed a number of challenges for transporting timber. To address these challenges and meet companies’ needs, a variety of structures were built starting in 1851. Booms were constructed along the river to corral logs and allow log drivers to move more freely. 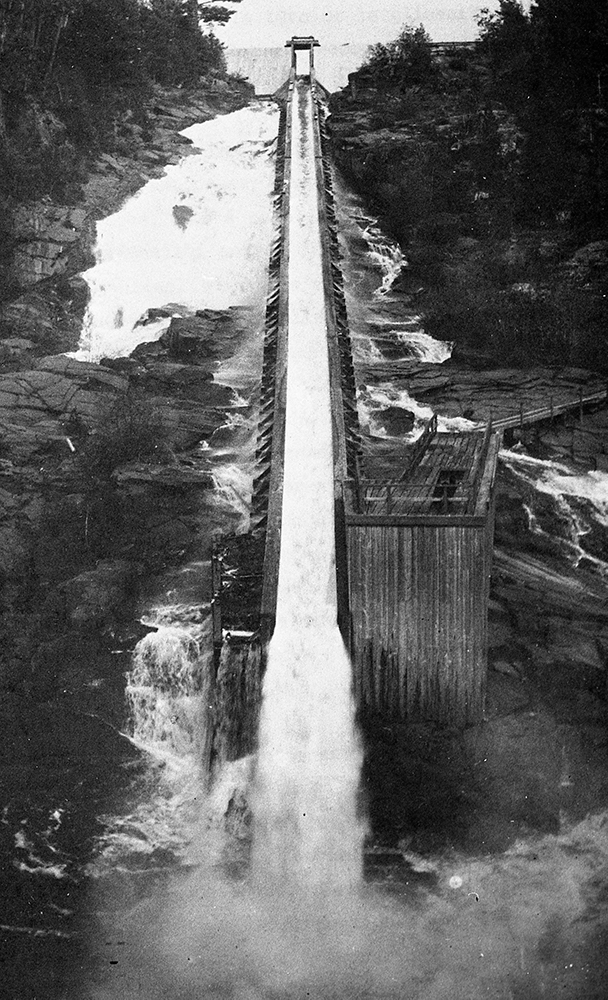 Timber slide in Shawinigan around 1880

Timber slides were also built to bypass falls, particularly in Shawinigan where the most extensive work was done. Around 1855, a large team of log drivers worked near the falls under the direction of boom master François Rousseau. He held this position until his death in 1881.

Log driving continued until 1995, when the last load of logs was dumped into the Saint-Maurice. Even nowadays, however, it’s not uncommon to see drifting logs from the past being carried along by the current.