Jewish merchants needed to bring the customers to their doors. In the early days of the community, as they moved from peddling to storekeeping, they relied on the good will and the word of mouth of their customers to adapt to this change. As the number of stores in the city increased, and as a means to divert customers from patronizing national chains, advertising in the newspaper was important. 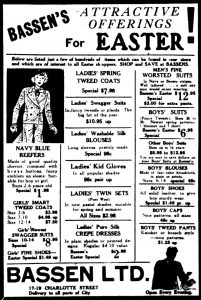 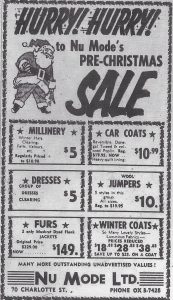 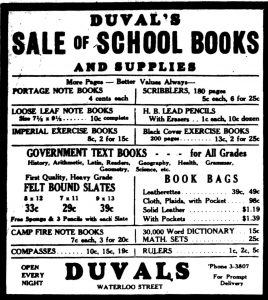 A survey of The Evening Times Globe from the 1930s to the 1980s reveals a number of interesting things about advertising. Throughout the lifetime of the Jewish businesses, newspaper advertisements were composed of words in various fonts and sizes or were illustrated with drawings of the clothing, shoes, home furnishings on offer.  For some of the larger stores or those who had owners with multiple talents the drawings would be produced by the stores themselves, but some were likely copied from the suppliers hoping the stores would carry their lines of merchandise.

Many stores advertised regularly – certainly by the 1940s several businesses made regular appearances on the same pages of the newspaper through the week for years or even decades. A good example of this was Calp’s who “owned” the fifth page for most of its history. 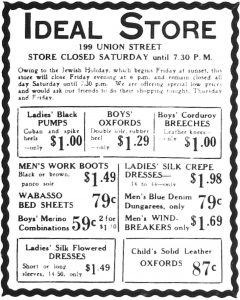 In The Evening Times Globe from the 1930s to the 1960s, the second page of the first section was filled with tiny ads from a wide variety of businesses which might appear only once or twice in the week. These ads might only be the name and location – the name was enough to define what the store sold, although sometimes there might be a line promoting one product or a specially priced item. 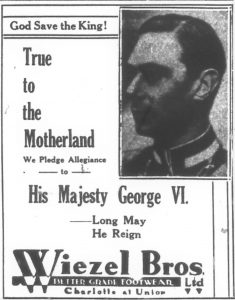 Some businesses – notably those selling groceries – would take out a larger ad to promote weekly specials to capture the attention of thrifty homemakers in search of bargains to keep their families well fed. 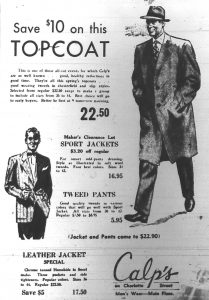 Changes of the season (fall, winter, spring, summer), special events (Canada Day, school opening or closing) and holidays (Easter, Christmas, Mother’s and Father’s Days) increased the size of the ads and prompted merchants who did not advertise on a regular basis to advertise goods in keeping with the season and gift giving needs. 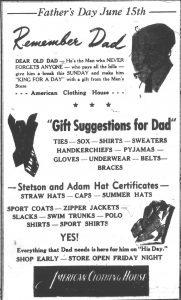 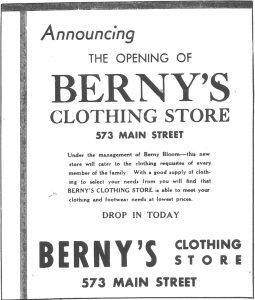 From time to time features on businesses would also appear which focused on neighbourhoods, exhibitions of particular products or retrospectives at the end of the year which encouraged store owners to comment on the year just ending and the year to come. 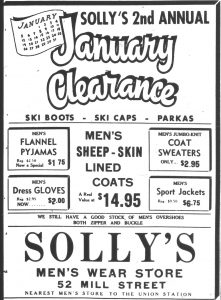 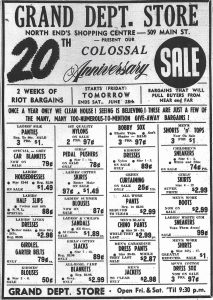 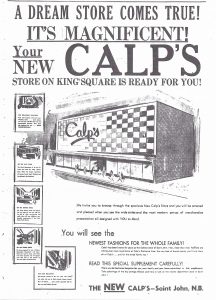 Professional Offices The End of an Era