Eel fishers in the Côte-du-Sud region must know their physical surroundings  very well. They work in a tidal zone where the environment can be as hostile as it is beautiful.

Simon Beaulieu during the visit to his fishing boxes at the rising tide, Rivière-Ouelle, 2016

All of the tasks they carry out on the shore of the river–e.g. building or dismantling their weirs or inspecting their collecting boxes–always have to be performed at low tide. This leaves them four hours at the most to work on their fishing gear or to remove the eels from the collecting boxes without actually having to stand in the water. They work methodically.

The fishers start by working close to shore while the tide recedes. They then take advantage of the period when the water is at its lowest to work further out. Lastly, they return to work inshore as the tide comes back in.

Since the tide is low twice a day, at more or less 12-hour intervals, the fishers sometimes have to visit their weirs in the middle of the night.

The phenomenon of tides

On the Côte-du-Sud, the greatest difference in level between high tide and low tide is 6 m. It goes without saying that when this tidal range is reached, eel fishing gear (ansillons, bourroles and collecting boxes) is completely under water at high tide.

The Tide : A Remarkable Phenomenon – View this video with a transcript

Eel fishers must wear clothing that is suitable for working in the water and, especially, in water that gets colder and colder as the fishing season progresses.

Hip boots and boot-foot waders are indispensable. Prior to the advent of rubber, nylon, and neoprene, these boots and waders were made of leather. 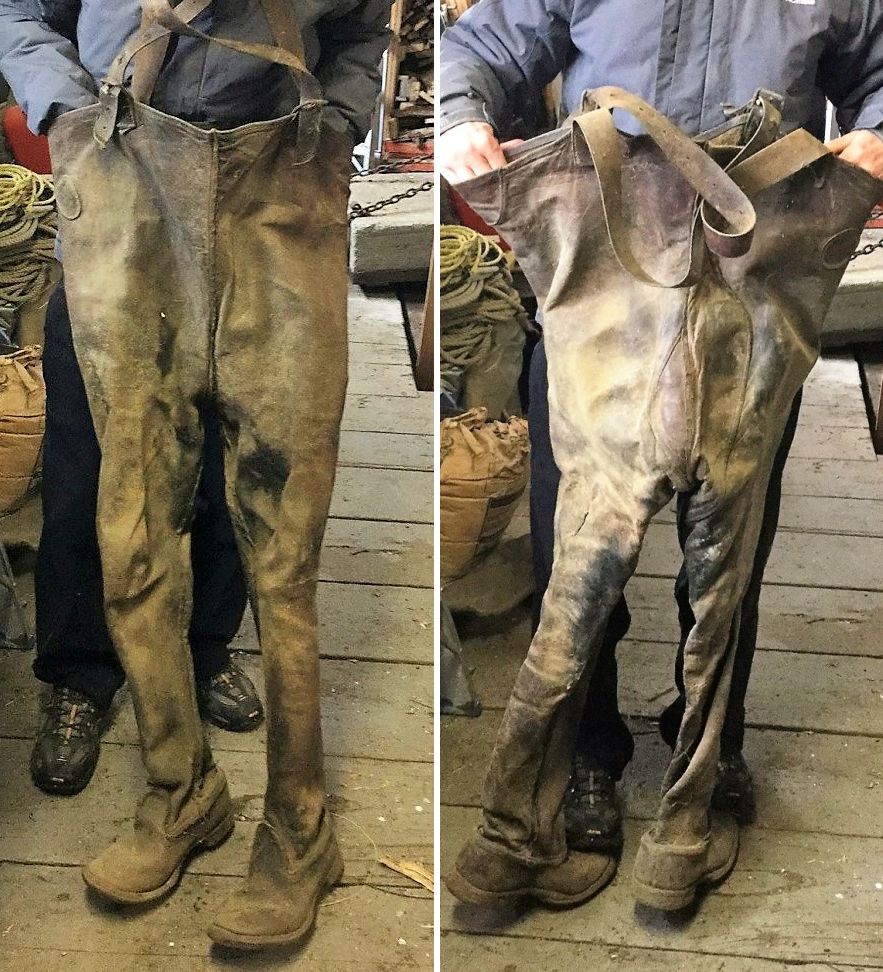 Boot-foot waders made with the leather of the hindquarters of a horse, circa 1908

The soles of boot-foot waders used to be attached with small wooden nails. The leather was waterproofed with some form of grease, such as beluga oil, neatsfoot oil or bear fat.
Fisher-Entrepreneurs Eel on the Menu