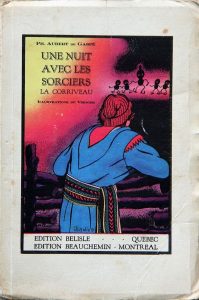 A legend of Philippe Aubert de Gaspé, circa 1942

Île d’Orléans was long nicknamed Île des Sorciers (Sorcerers’ Island) because sorcerers had reportedly been seen there on certain nights. This belief, dating back to the 18th and 19th centuries, stemmed from the presence of eel fishers.

These fishers carried torches when they visited their eel traps at night. They thus offered a supernatural vision to the inhabitants on both sides of the river who saw the flames moving back and forth.

This led to the belief that the island was inhabited by sorcerers, will-o-the-wisps and other malicious spirits.

Also on Île d’Orléans, the devil is said to have helped build the church in the village of Saint-Laurent. Having taken the form of a very strong and tireless horse, he transported large blocks of stone. The animal’s owner had expressly forbidden that the bridle be removed. Unfortunately, someone took it off so that the horse could drink, and tragedy struck. There are two known endings to this legend. According to the first one, the horse dove into the river and turned into a giant eel, while according to the second, the horse disappeared and it was the person who had removed its bridle who turned into a giant eel.

Several popular expressions refer to certain characteristics of eels or to beliefs held about them. Here are a few examples:

To be as slippery as an eel — To be devious, scheming and untrustworthy

Lastly, French-speaking fishers used to say: “La neige, c’est du sel pour l’anguille” (Snow is salt to an eel). This meant that the eel fishing season was over after the first snowfall because that was when the eels would leave.

In certain parts of Québec, the space between two shingles is called an anguille (eel).

There is a slip-knot that French-speakers call a noeud d’anguille (eel knot).

A Good or a Bad Fishing Season? Measures to Save Eel