Eel fishing is a commercial activity that is very closely tied to individual families. Fishing rights, which have now become fishing licences, have been handed down from father to son for generations. All the know-how and construction methods needed to ensure large catches have been transmitted along with these rights and licences.

Each family’s records contain a substantial amount of information on good and bad fishing seasons. They reveal what techniques have been tried and which ones have been successful.

Knowing how to choose a strategic location for installing a weir is part of each family’s know-how. Fishers look for points because this is where catches are likely to be most abundant. There are all sorts of techniques for finding the best spot.

Choosing a Good Spot – View this video with a transcript

Building when the weather is nice

At the end of fishing season in the fall as well as in early spring, fishers start to prepare all the wood they will need to build the framework of their eel weirs. This task is on top of the seasonal chores they have to do on their farm, since most fishers are also farmers.

Construction work begins on the weirs near the end of April and lasts for almost the entire summer. This is because it can only be done when the tide permits.

Even today, the steps involved in building a weir are always done in the same order.

Fastening of the nets to the base of the stakes

Fastening of the nets to the top of the perches de ret. 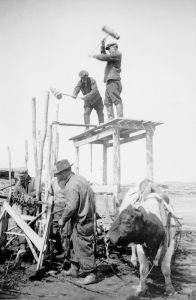 Construction of a weir in Saint-Denis-de-la-Bouteillerie (Québec), 1939

Before the process became mechanized, the stakes used to build a weir were driven into the ground with sledge hammers.

Apparently, up to three hammerers would take turns hitting the same stake. Their strength was put to the test by their hammering speed, which was in turn largely driven by their pride.

Preparing for the Fishing Season – View this video with a transcript

The steps have remained the same over time

Just before fishers install the nets, they cut a large number of fir boughs. The boughs are placed at the base of the leader and the wings. A plank is used to press the boughs together and hold them firmly in place, so as to create a barrier that prevents eels from swimming under the nets. Fir boughs were already in use in the days of bush weirs. The only real difference is that they are now cut by chain saws rather than axes and are transported by tractors instead of horses.

Émile Lizotte and his son Georges-Henri are working on the construction of a hunting wing, Rivière-Ouelle (Québec), 1966

In the past, when fishers had to install their weirs on a rocky foreshore, they built them with free-standing claies, or panels, made of brush. To build his weir, Émile Lizotte of Rivière-Ouelle used 70, 3.5-m long panels of this kind. He placed hundreds of large rocks at their base to prevent them from being swept away during storms. 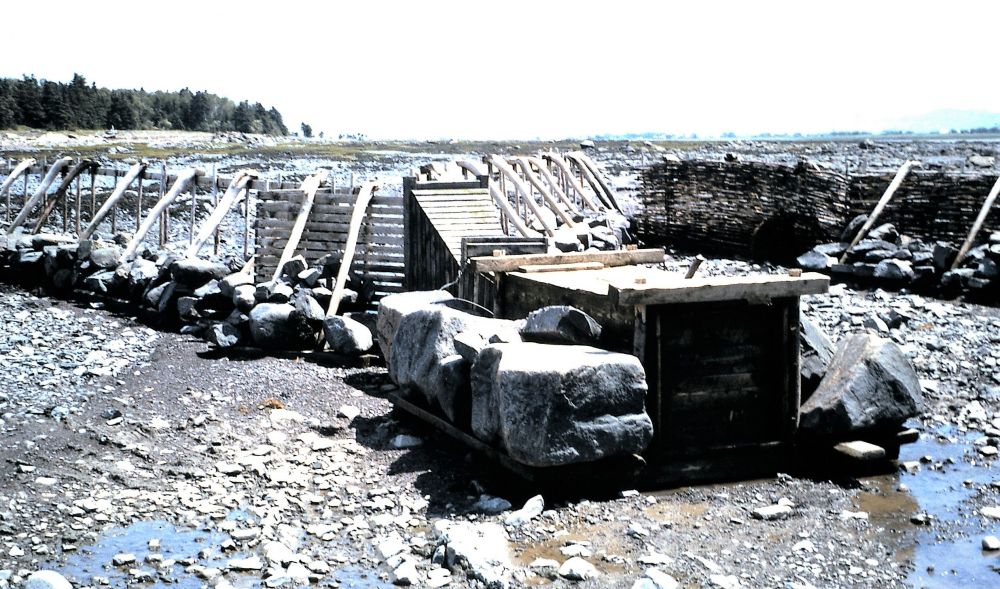 The ansillons, bourroles and collecting boxes are the last structural components to be put in place. The nets are installed in late August or early September, in time for the arrival of the first eels around mid-September.
From Brush to Nylon Intriguing Differences