I loved fishing season when I was a boy. I ran from one weir to another to see how many eels were in the collecting boxes.

The fishing season starts around September 20 and ends in the first few days of November. During that period, adult eels migrate to the Sargasso Sea. They leave their freshwater growth habitat and swim slowly down the St. Lawrence off the Côte-du-Sud. This allows them to become acclimatized to the water, which is initially brackish and then becomes salty. 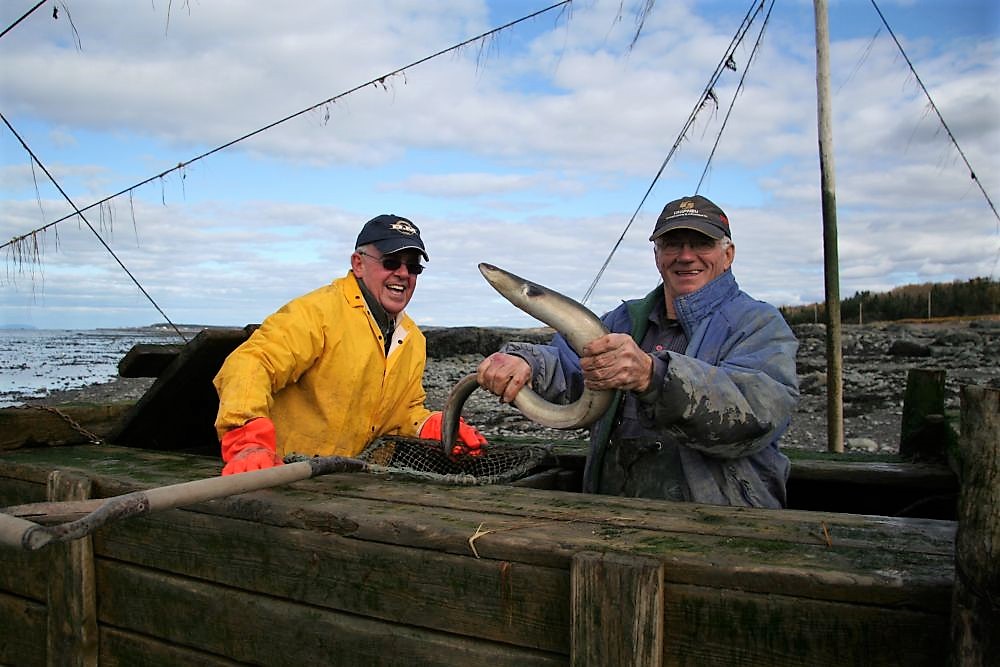 Georges-Henri Lizotte is holding an eel with his bare hands, Rivière-Ouelle, 2008

A lot to do in a very short time 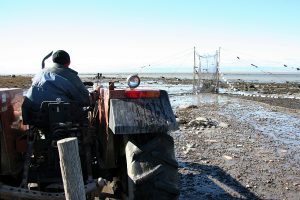 Georges-Henri Lizotte goes to one of his eel fishing inatallations, 2016

The fishers have to do several chores when the tide is low. They have to empty the collecting boxes, check their equipment and repair it, if necessary, within a short period of time. They also have to move the eels to holding tanks.

The fishing season is a period of intense work. The fishers are busy seven days a week, during the daytime and sometimes in the middle of the night, because they have to schedule their activities according to the tide.

The fishers usually use a tractor, with a trailer attached, to reach their weirs. They used to use horses and tumbrels (a kind of cart).

Dealing with the wind and the tide

Fishers plan their inspection of the collecting boxes based on the direction and speed of the wind and the time of the tides. They do not follow any particular order from one day to the next. Hip boots and boot-foot waders are obviously required.

Let’s Empty the Traps – View this video with a transcript

When the fishers collect the eels, they always check the state of their fishing gear. They pay particular attention to the nets, removing any debris left behind by the tide. Some of the nets have to be re-attached to the poles or repaired. If necessary, planks are renailed into place and objects that are a source of pollution, especially those made of plastic, are collected. Seaweed and other debris blocking the entrance to the ansillons or contained in the bourroles and collecting boxes are also removed.

Inspecting and Repairing a Weir – View this video with a transcript

The fishers use a saillebarde to take the eels out of the collecting boxes, especially if the boxes still contain water. Otherwise, the fishers pick them up with their hands. Tongs or grappling hooks are no longer used because they injured the eels and sometimes affected their resale quality. After the eels have been removed from the collecting boxes, they are taken to holding tanks. If there are not very many, they are transported in jute bags. Otherwise, they are transported in a trailer.

Intriguing Differences Out of the River and Into the Holding Tanks