Regardless of the period concerned or the materials used, the principle of eel fishing in tidal zones is always the same.

How Do You Catch Eels with a Weir? – View this video with a transcript

Weirs made of brush Weirs used to be made of alder or thin fir branches woven together on either side of stakes made of black spruce. The branches, or brush, blocked off the openings between the stakes, creating a barrier or wall. 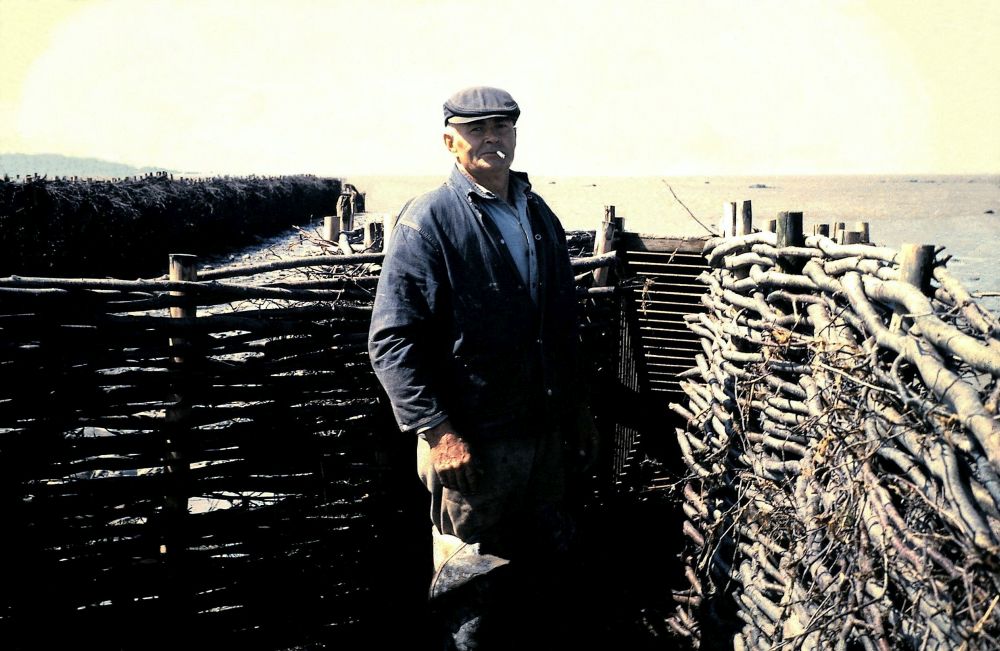 Émile Lizotte in front of her fishing gear, 1966

The branches were woven together from the bottom to the top, one row at a time. They were pressed together at the bottom to make a denser, stronger wall. 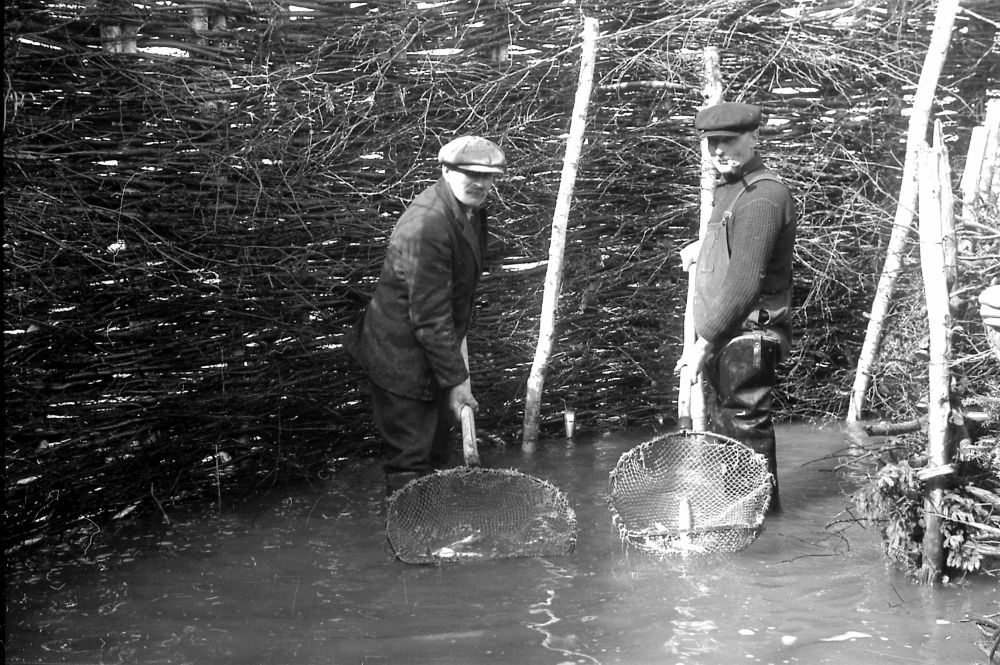 Fishers built their fishing gear based on what they had learned from listening to oral traditions and observing the environment. No two brush weirs were the same. The methods used to build weirs still vary today, depending on the location and surrounding terrain, as well as the materials available and the ingenuity and skill of each fisher.

Today, nets have replaced the brush that was once used for building weirs; however, the  layout is still the same. The advent of nets made it much easier to install the fishing gear. Some fishers opted for wire mesh, but eventually decided to use nylon. In fact, wire mesh was rapidly abandoned east of Montmagny, mainly because it was not very easy to work with and was subject to damage from brackish water, strong waves and floating debris.

Since the late 1970s, floaters have been attached to the nets that form the wings and leaders of eel weirs. In addition, two tall posts have been installed at either end of each wing and leader. Representatives of the Association des pêcheurs d’anguilles du Québec learned this construction technique while on a study tour in Sweden.

A short glossary of eel fishing

Ansillon: The first funnel-shaped structure located at the spot where fishing nets come together and form a “V” that leads eels toward a trap.

Bourrole: The second funnel-shaped structure, located between the ansillon and the collecting box of an eel trap. It is smaller than the ansillon.

Brush: Branches that have been cut or broken off.

Fishery: The occupation, industry, or season of taking fish; a fishing ground or area where fish are caught.

Foreshore: A strip of land that is flooded at high tide and free of water at low tide.

Leader: A wall of vertical netting set at right angles to the shore that guides eels to the ansillon.

Perche de rets: A tall wooden pole used to install and hold in place netting on the upper part of a weir.

Rets: A net or piece of openwork material made of string, cord and so forth knotted together and used for catching fish or birds.

Saillebarde: A net mounted on a square iron frame with a long handle for removing eels from the collecting box of an eel trap when the box contains water or a large number of eels.

Weir: A fence or an enclosure set in a waterway for catching fish.

Wing: A wall of vertical netting forming an acute angle or a “V” with the leader of a weir.