Everything about eels is designed for their reproduction in the Sargasso Sea, the place where they were born and where they will spawn before they die. 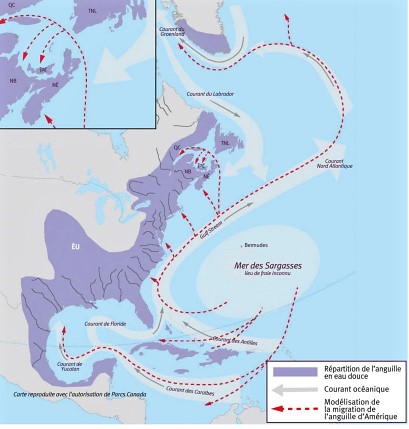 In the Sagasso Sea, situated in the middle of the Atlantic Ocean, eel eggs hatch into larvae, or leptocephalae. The larvae follow the Gulf Stream as they embark on their journey up the Atlantic. Once they have metamorphosed into glass eels and measure nearly 80 mm long, they migrate toward the coasts and estuaries of Europe and North America. They then divide into smaller groups and spread out in the various tributaries. Some eels settle there, while many others continue on to their growth habitat, which may be as far away as the Great Lakes. Eels begin their return migration 20 to 25 years later, thanks to a series of remarkable metamorphoses.

Fat but Travelling Light – View this video with a transcipt

During their adult life, eels eat the equivalent of one quarter of their weight in food every day. Contrary to popular belief, eels are not scavengers. The live prey they eat contributes to their growth and enables them to accumulate fat reserves.

Eels travel an average of 8000 km during their lifetime. They travel half of this distance without eating, when they migrate back to the Sargasso Sea. The fat they accumulate as adults is essential for this one last journey.

Fat for One Last Mission – View this video with a transcript

A Fascinating Fish A Good or a Bad Fishing Season?