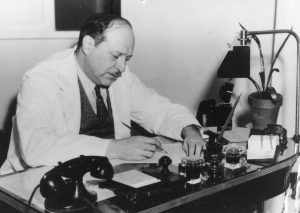 The introduction of textile factories attracted a vast wave of immigrants to Magog. A good many of the newcomers settled in the areas around the factory where a new neighbourhood known as “the Eastern district,” “Lower Town,” or, more recently, “the Weavers’ district” was created.[1] However, that did not mean that its demographic weight, which justified the creation of a new parish in 1921, was reflected in its school infrastructure.  The absence of schools in this sector caused tension between its residents and the Catholic School Board (CSB), a tension that, geographically, was located on either side of Sherbrooke Street between the upper and the lower town.

As of 1894, residents of the district pressed the School Board for a school, a demand that was all the more urgent considering that, in 1891, 55% of the population of the town of Magog consisted of residents under the age of twenty.[2] The Catholic School Board denied their request, however. At the time, they prioritized the conversion of the College Street School (Upper Town), in order to welcome the Frères du Sacré-Cœur the following year.[3]

The “Crèche”: A partial solution 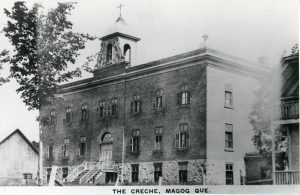 TThe demand by district residents remained dormant, therefore, until 1909 when it was partially answered by the opening of a school at a day-care centre “La Crèche” that had been founded two years earlier. “Given that this facility offered childcare, orphanage, hospice and hospital services”,[4] Grades 1 to 3 were also taught there. This was, however, severely insufficient and a far cry from the schooling needs of the neighbourhood. 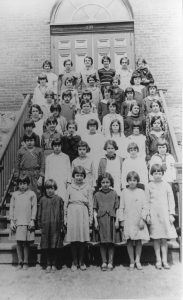 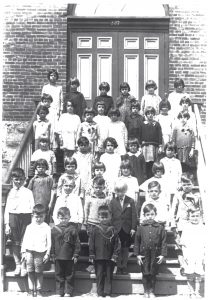 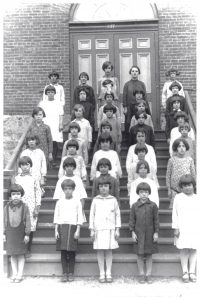 In 1922, several residents of the district, frustrated by the CSB’s attitude, founded their own school board (Sainte-Marguerite) and established two schools in private homes. However, as it did not conform to the town’s charter, the board was dissolved in 1923. Nevertheless, it succeeded in forcing the Catholic School Board (CSB) to take charge of its schools, which the CSB did for five years. 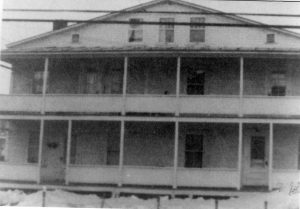 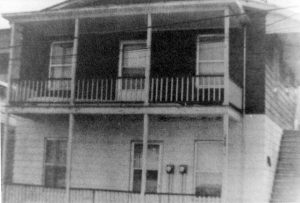 St-Marguerite Convent and College: Fruits of a hard-fought battle 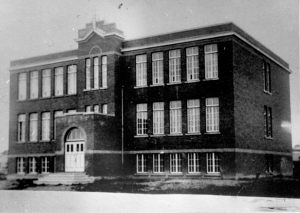 In 1928, the Catholic School Board (CSB) closed the two small schools and arranged for Sainte-Marguerite convent to be built. Although classes were crowded, the school made it possible to respond to the need for girls in the district to attend school. However, the CSB’s separate school policy prevented boys from attending the convent beyond Grade 3. District residents, therefore, confronted the CSB once again, given that the latter systematically refused to construct a school for boys. Such was the case, for example, in 1934, when the CSB favoured the construction of additions to Saint-Patrice Academy (upper town) and to Sainte-Marguerite convent rather than build a school for boys in the Eastern district.

CAs Alain R. Roy has pointed out, this lack of consideration for the Eastern district may well be attributed to the fact that only one resident of the district (Albert Pratte) was a CSB member from 1915 to 1933 [5]. Nonetheless, Eastern district residents still began taking control of the Catholic school board by having members from their district elected during the 1934-1935 school elections.  The arrival of Dr. Armand Voyer and of George G. Hamel, as well as the re-election of Albert Pratte, gave them the majority on the school board, which then finally allowed Sainte-Marguerite-Marie College to be built in 1937.

From their initial request in 1894, the district’s residents, therefore, had to wait thirty-four years before having a school for girls, and forty-three years for a school for boys. 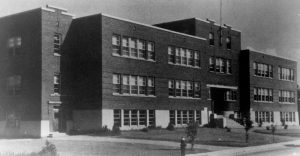 Students of Sainte-Marguerite College and Convent 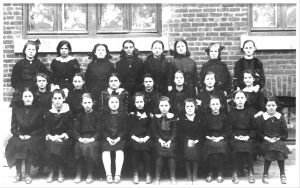 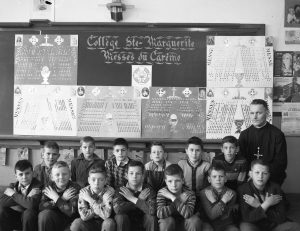 A Classroom at Sainte-Marguerite College 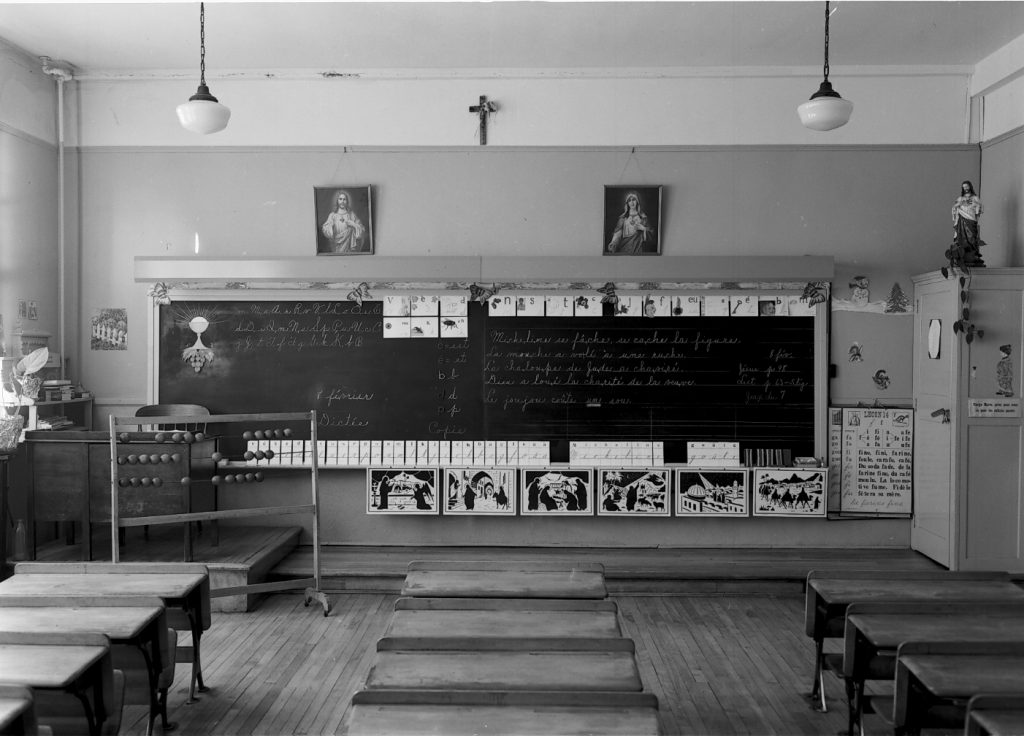 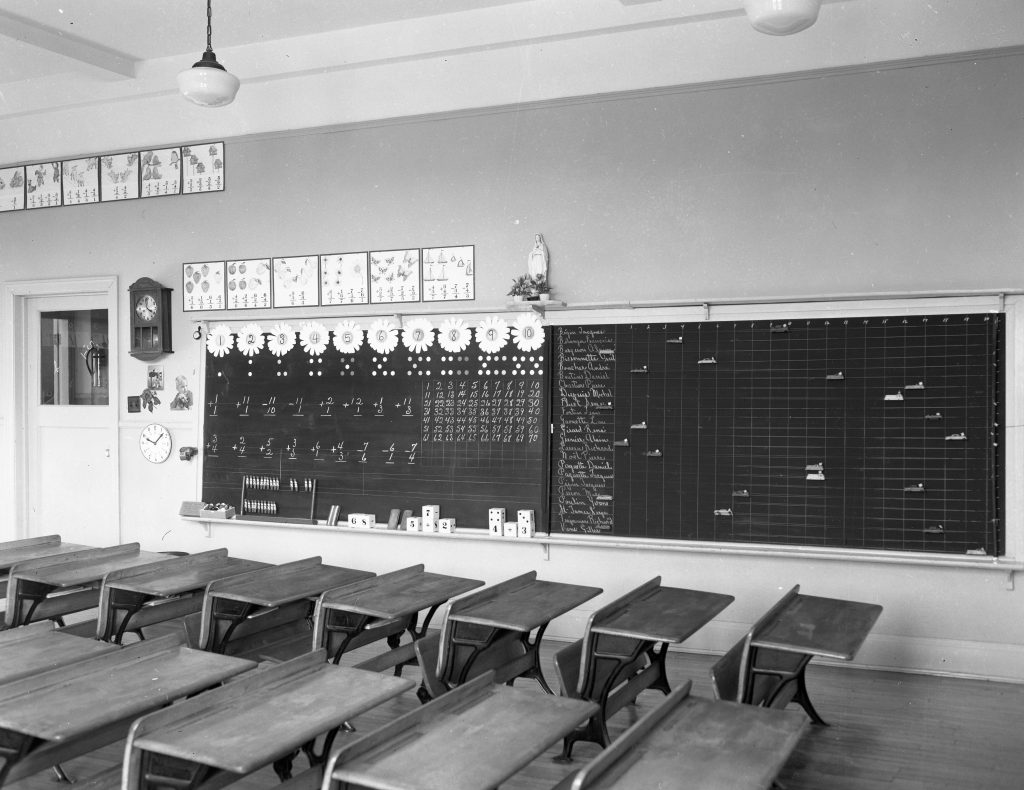 [1] The term “Lower Town” is a designation that is in contrast to “Upper Town.” Based on an analysis of the intersection of history and spatial geography, Maurice Langlois and Serge Gaudreau suggest that the inequality between the two districts was apparent in both the topography and the socio-economic levels of their residents. The residents of “Lower Town” were made to be looked down upon physically as well as socially by the residents of “Upper Town.” It is that notion that led Langlois and Gaudreau to the “town on two levels” concept. To that effect, see Maurice Langlois and Serge Gaudreau, Magog en mots et en images: 50 événements marquants de son histoire, Magog: Authors, 2018, p. 147-148.

8. Religious Orders and the Consolidation of the Catholic School System 10. The School of Arts and Crafts: A Way to Alleviate the Industrial Town’s Evils (1937-1961)