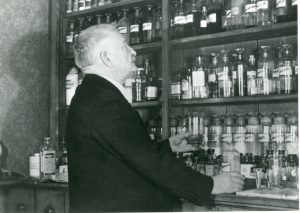 Although the industrialisation of Magog had enabled it to grow and modernise, industrial town evils were a major concern for a portion of the population. That was the case, for example, of the French-Canadian elite during the 1930s who worried about the future of their young people at a time marked by economic crisis, unemployment and the presence of new diversions like the cinema. Their concerns also had an impact on Magog’s educational system, particularly by bringing about the founding of the first arts and crafts school in 1939.

The School of Crafts: A way to keep young people safe from urban vices

On the one hand, because Magog was an industrial town, it was very common for children and adolescents to enter the work force. In many cases, they held down a little job in a store or found work at Dominion Textile.[1]. However, the Great Depression brought on by the 1929 stock-market crash increased unemployment. As a result, some young people found themselves simultaneously excluded from the school system and from the job market, a situation that concerned many members of the French-Canadian elite.

Consequently, Édouard Roy, chief editor of La Chronique de Magog in 1937-1938, wrote several articles advocating for the establishment of a school of crafts in Magog. The idea was to avoid idleness amongst young people who would become, according to him, more susceptible to delinquency and subjected to the negative influences of entertainment:

Of course, it is difficult to measure the scope of this phenomenon and to know whether or not it was more imagined than real. Nevertheless, it is important to acknowledge that this type of discourse probably contributed to the legitimisation of a school of crafts project.

The School of Crafts: A way to better integrate boys into the work force

The school of crafts’ role was to offer technical training to adolescents as well as interested adults. It offered them a better integration into the workforce. This need was of particular concern to Dr. Albert Isidore Guertin, the project’s main architect, who thought that school was not preparing boys to confront adult life, as this journalist from La Chronique de Magog emphasized:

Moreover, it is important to note the masculine nature of this school, evident in the words of Dr. Guertin, but also in its location (at St-Patrice Academy, a boys’ school) and in the skills that were taught (carpentry and cabinetmaking.) Evidently, more than youth, it was boys who were the target of this project.

In short, these reasons explain the opening in 1939 of the school of arts and crafts. Set up in the basement of Saint- Patrice Academy, it remained active from 1939 to 1961, when it was closed in order to enable the construction of the recreation centre.

Some of the Items Made at the School of Crafts

The oldest sources mentioning activities of students at the school are dated July 12 and 19, 1941. In two articles in La Chronique de Magog, a journalist describes in detail the first exhibition of work by the students:

These types of projects are depicted in photographs taken in June 1947 at the request of the first teacher at the School of Crafts, Jean Chalifoux. 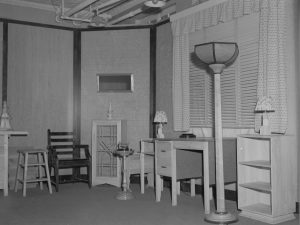 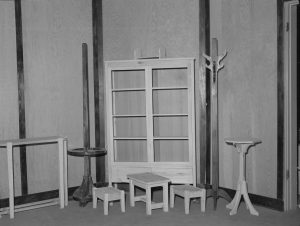 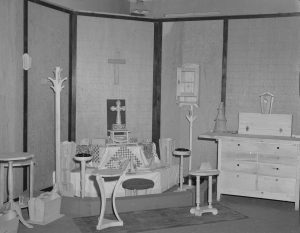 A Course at the School of Crafts on Percy Street 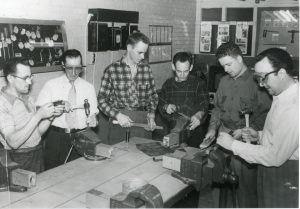 After being closed for three years, the School of Arts and Crafts re-opened on Percy Street in 1963. It closed definitively in 1986. Source: Magog Historical Society, PR002 Collection Bibliothèque Memphrémagog\album 2\photo #312.

[2] Traduction: “The imagination of youth [he wrote] cannot remain inactive. If it is not furnished with healthy ideas, if it is not focused on a task, a craft, it will easily seize upon all that is offered to it in magazines or in cinemas that serve us […] films that are more or less moral.” Édouard Roy, (22 October 1937), Il faut un métier aux jeunes, La Chronique de Magog, p. 4.

[3] Traduction: “In his speech in support of such an institution, the project’s promoter, Dr. Guertin told members of the committee that young girls come out of the convent very well equipped to become women, while young boys are not [being prepared by schools to become men.]”Author Unknown (10 September 1937), Le Dr Guertin demande une école de métiers, La Chronique de Magog, p. 1.