Getting to school on foot: not always easy in winter! 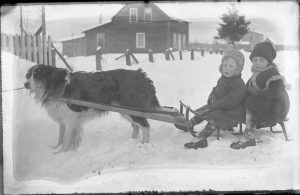 In Magog, during the 19th century and the first half of the 20th century, the most common way to get to school was on foot. However, walking to school, which might be several kilometers from home, could prove to be difficult in winter, as Françoise Dezainde, a former student at Omerville Convent in the 1950s, testifies: “We others also walked a mile on foot. Winter, that wasn’t easy. Sometimes the road was not always open. We had to make our own way.” Making their own way was, indeed, particularly trying for girls given that they were obliged to wear tights.

Mrs. Françoise Dezainde on the walk to school during winter 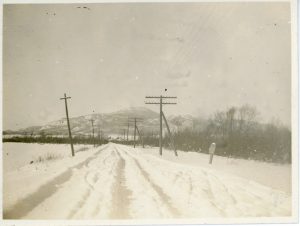 This explains why some students travelled to school by dogsled. Once they arrived at school, as historian Jacques Dorion, explains, they “unhitched the animal and tied it to a corner of the woodshed.”[1] As the above photograph shows, some children had this type of sled. It is, therefore, highly likely that some of them used their sleds to get to school.

Schools and the Automobile

The arrival of the automobile did not change the habits of students, a vast majority of whom continued to walk to school daily. However, the rapid increase in automobile traffic began to represent a new risk for children during the 1930s, the number of licenced vehicles in Québec climbing from 41,562 to 178,548 between 1920 and 1930.[2] These figures were indeed reflected in the number of vehicles travelling the streets of Magog, as the photographs below show. It is enough to compare the pictures to understand the degree to which pedestrians did not move around Magog in 1941 as freely as they did in 1922. 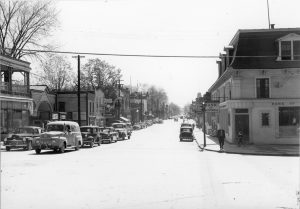 In 1937, in order to deal with the new urban reality that automobile traffic represented, the school board, in conjunction with the municipality, inaugurated the first teams of brigadiers. The newspaper La Chronique de Magog signaled city councillor Henry Chamberlin as being among the first supporters of this project. He had seen brigadiers in action during a trip to Newport, Vermont.[3] If things had gone according to plan, the brigades would have been organised in the following way:

The speed with which vehicles travelled along Saint-Patrice Street, where three schools were located, was of particular concern for the Magog community. Among all the vehicles, it seems that inter-urban transport trucks, which took Saint-Patrice Street in order to avoid Main Street, represented the biggest threat. [5] In actual fact, the introduction of brigades was a stopgap measure since the town of Magog had neither the judicial nor financial means to control automobile circulation in 1937. Only a provincial constable had the power to fine drivers or to take away their driver’s licence. Since local police did not have this power and the town did not have the means to pay for the services of a constable, the brigadiers represented the most efficient way to protect Magog’s school children. [6]

The Beginnings of Motorized Transportation

The oldest source found so far that mentions motorized school transportation dates from the 1951-1952 school year. It is in a text written by a student of Magog High School named Ernestine Sheldon., She published an essay in a souvenir album about the bus that transported her daily between Fitch Bay and Magog. If we can rely on her description, the bus was, indeed, in very bad condition:

«The roof, punctuated with various sized holes, resembles and corresponds to an over grown sieve. […] Flat tires, lost hub-caps, bent fenders, weak shock-absorbers, broken bumpers, windows that won’t roo up when they’re down and won’t roll down when they are up are all minor details.»

Despite all of that, however, this dilapidated bus enabled many students to attend a school which otherwise would not have been inaccessible because the distance was too far for them to walk. 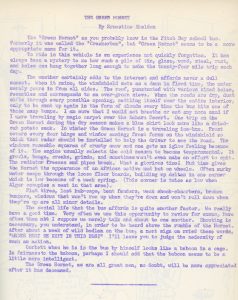 Unfortunately, it has not been possible to track down a photograph of the Green Hornet in the Magog Historical Society’s Collection. However, it was possible to locate pictures of two other school vehicles in service after the publication of Ernestine Sheldon’s text, that is, during the 1958-1959 school year. As the photographs suggest, these vehicles were obviously not built for school transportation. 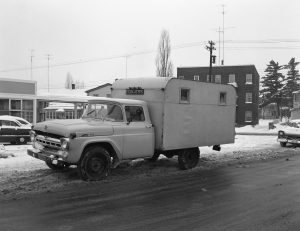 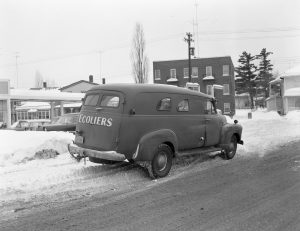 It is certainly obvious that motorized school transportation did not have its start in the most luxurious fashion! Nevertheless, many students must have been awfully happy to avoid having to trudge their way through snow-covered streets, or to take advantage of the drive in order to review for an exam, as the passengers of the Green Hornet did 1951-1952.

[4] Traduction: “The children will be divided into groups of about 25 and will be led by a chief who will be called the Brigadier. This person will be in charge of facilitating crossing the streets when the students enter and leave their classes. He will wear a special belt and insignia. He will be able to interrupt traffic in order to allow children to cross the streets in complete safety.”Ibid.

[5] Recall that Highway 112, which passed through Magog’s Main Street, was the hub of the transportation route used the most in order to travel between Sherbrooke and Montréal up until the construction of Highway 10 in 1964.

11. Educational Violence in the Region of Magog Bibliography