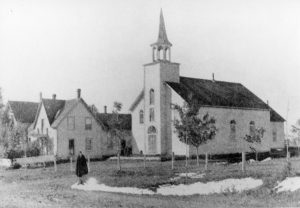 While Magog was founded by Protestants of American or British origin, more and more Catholics settled there throughout the 19th century, first Irish and then French-Canadian. Catholics even became the majority during the 1880s. The increase was due mainly to the growth of the French-Canadian community in Magog, a growth that was spurred on by industrial development. It is sufficient to consider the proportion of French-Canadians before and after the arrival of the textile factory in 1884 to realize this: while the latter represented 32% of the population in 1881, it represented 60% of the population in 1891.[1]

This demographic evolution had a direct impact on the Magog school system. For example, in 1867, 18 of the 52 students at the Magog Academy were Catholic. Four years later, in 1871, the proportion of Catholic students had increased to 30 out of a total of 75 students.[2] Since the Magog Academy was Protestant and its lessons were given in English, the need to establish a school that responded better to the linguistic and religious needs of Catholic families became a priority during the last quarter of the 19th century.

Consequently, the Catholic community broke away from the Protestant school board in order to found its own schools. A first school was set up in 1879 in the sacristy of Saint-Patrice Chapel where lessons were taught by the parish priest, François-Xavier Michon. At first, the students were of quite diversified origins. According to Alphonse Girard, of a total of twelve children, there were three Francophones and nine Anglophones, several of whom were Irish.[3]

The first Catholic school in Magog was built in 1881. Made of wood and measuring 24 feet by 40 feet, it was located on Main Street. However, it was not in service for very long.  For one thing, its capacity was quickly exceeded by the arrival of a vast number of French-Canadians. For another, the railroad extension in the direction of Sherbrooke and towards the new textile factory was located only a few feet from the school. The school and the land were sold three years later to L. A. Audet, a notary, who bought it and made it his home. [4] 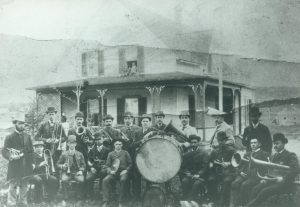 First school built by the Magog Catholic School Board in 1881 and sold to the notary L. A. Audet in 1884. Source: Magog Historical Society PR024 Collection Studio R.C.\album 4\photo # 565.

6. The Merry Family’s Legacy to the Protestant School System 8. Religious Orders and the Consolidation of the Catholic School System