While a child’s journey through school could represent an enriching experience, it could also be extremely trying. That is what many 19th and 20th century sources tell us when they refer to the severity and violence of discipline in the schools of Magog and the surrounding region.

In the 19th Century

CAn 1857 personal diary belonging to a teacher in Magog provides an example of how severe the discipline was. In reference to a lesson on writing given January 7, 1857, the teacher writes: “punished one of my little disciples rather forcefully.” I am told his mother is angry. We shall see.”[1] The punishment must have indeed been severe because the school council met two weeks later in order to address the issue. The meeting is mentioned in the January 20, 1857 entry: “the school Coun[cil] met at the school house to examine the case of Symon C’s punishment”.[2] Unfortunately, the source mentions nothing further about the matter. Even if it is impossible to know the nature of the punishment inflicted upon little Simon, it is important to remember, however, that in the education of children, at school as at home, violence was common, as the historian Marie-Aimée Cliche notes:

“Laws of the time took into consideration violence inflicted on children. The Traité sur les lois civiles du Bas-Canada/ Treaty on the Civil Laws of Lower Canada of 1832 stipulated that ‘fathers and mothers have the right to exercise moderate discipline on their children.’  This clause is repeated in the Code civil du Bas-Canada/The Civil Code of Lower Canada: as long as a child is a minor, ‘the father, or the mother in his absence, has the right to exercise moderate punishment on the child, a right which can be delegated to those in charge of the child’s education.’”[3]

In the 20th Century 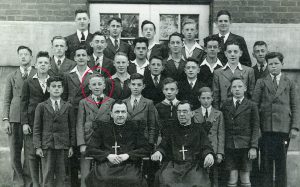 More recent sources go into much more detail about violence, especially physical violence. This is the case, for example, of the testimony given by Maurice Langlois, a former student at Saint-Patrice Academy (College) in the 1930s and 1940s. He explains that the school director, a Sacré-Cœur Brother , used a belt, or a “strap,” to slap the hands of unruly students. The presence of the “strap” in Magog schools has been confirmed by many testimonies such as this one, quoted by Serge Gaudreau: “Brother Superior, the head brother there, he had a big strap.” [4] Someone else, in reference to the time he spent at Sainte-Marguerite College , also mentions the presence of the strap: “then he (the head brother) showed me the strap. There was a big strap at the time then he showed me that […] he threatened us that if we didn’t listen, we would be in for the strap.”[5]

Physical punishment was used not only on boys. A former student at the Omerville Convent recalls that students there who had more than ten dictation errors earned themselves ten raps of the ruler on their fingers, and this in the middle of class in full view of their fellow classmates.

Mrs. Françoise Dezainde on corporal punishment at the Omerville Convent 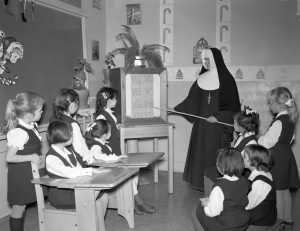 Faced with this sort of physical abuse, pupils did not remain passive, however, and used various strategies to defend themselves. At Saint- Patrice College, students would circulate a stick of rosin. In this way, students sent to the head brother waxed their hands with rosin in order to cushion the blows of the strap. Indeed, still according to Maurice Langlois, particularly rebellious students did not have to look far to find a stick of rosin because they generally knew which student had it. At the Omerville Convent, in order to defend a fellow student, one pupil asked the nun teaching the class if she could receive the raps of the ruler in place of her friend. Another, in a country school, disarmed the teacher, broke her ruler and threw it out the window in order to defend her little sister.

Even if physical punishment represented a common teaching tool in Magog schools, students were not simply passive victims. They did resist when confronted with such violence.

The encounter between violence and education was carried out not only on the student’s physical body. In fact, in at least one case, that of the Hooper family, it had repercussions on the family’s spiritual life.

Norman Hooper, a former student at St-Patrice Academy, explains. His father, Chester S. Hooper, a Catholic of American origins, wanted his children to learn English. For that reason, he enrolled his daughter in the English program at Sacré-Cœur Convent . However, a similar program did not exist in the Catholic School Board’s schools for boys.

Therefore, he wanted to send Norman to Magog High School. He was forced to abandon this project given that the priest of St-Patrice parish threatened to excommunicate his family if he were to send his son to a Protestant school, a particularly serious threat because it meant that the Hooper family would be rejected by the religious community and deprived of Catholic sacraments. In light of this, Norman Hooper’s parents sent him to St-Patrice Academy where he began his studies in 1935 and where he completed the eleven years of schooling.

This example serves to illustrate the degree to which education and religion were tied to one another before the Quiet Revolution, and what forms of constraints this interaction could impose on families.

Mr. Norman Hooper on the choice of his school and the influence of the clergy 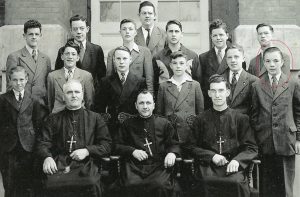 [1]
Magog Historical Society, Merry Family Collection. The quote is from a translation from Spanish to French by Louis-Charles Cloutier Blain. The original quote is as follows: “Castig[ué] uno de mis discipulitos bastante fuerte – se dicen que su madre de el esta enojad[a] – veremos.” It seems that the teacher had a command of the Spanish language (not without difficulties), given that his diary was written as well in this language as it was in English.

10. The School of Arts and Crafts: A Way to Alleviate the Industrial Town’s Evils (1937-1961) 12. The Evolution of School Transportation in Magog